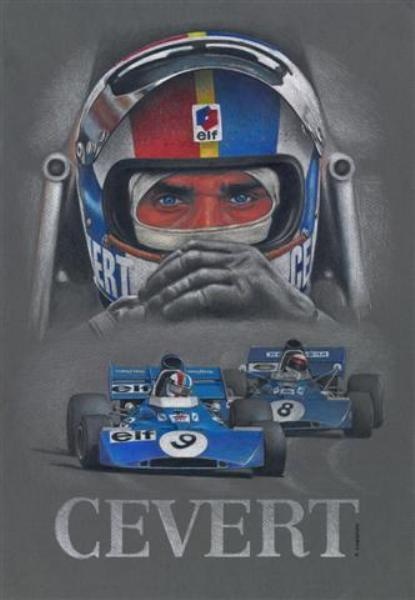 When Francois Cevert crossed the line to take the checkered flag for the 1971 United States Grand Prix at Watkins Glen, it was a day he would never forget. He was scoring his first world championship Formula 1 victory with Ken Tyrrell. Moreover, it was the first Grand Prix victory by a French driver since 1958 when Maurice Tringtingnant took victory in the streets of Monte-Carlo.

Fast and tragically forward to October 6, 1973. It turned out to be a day racing fans around the world would never forget. The dashing French driver was set to take over the Tyrrell team leadership from his mentor, Jackie Stewart, who was planning to start his 100th and final Grand Prix in the season finale on Sunday in the Finger Lakes region of upstate New York.

Tragedy struck on Saturday when Francois Cevert lost control of his machine at high speed and was killed instantly in a vicious accident. Jody Scheckter, first driver on the scene, today has no memory of what he saw.

Cevert was born in Paris on February 25, 1944. In 1966, he beat another future French Formula 1 star, Patrick Depailler, to win the Volant Shell competition. Cevert took the French F3 championship in his second full year of racing in 1968 with five victories.

The following season, 1969, saw him make his F2 debut, winning a non-championship race at Reims and also making his Grand Prix debut at the 14.2-mile long Nurburgring in his F2 Tecno.

Highlight of the season came in the Paris 1,000km where Cevert and Jack Brabham drove their Matra to victory at Montlhery.

In 1971, Cevert had three podium finishes in France, Germany and Italy before sailing to victory in the Finger Lakes region of New York. His maiden win in 1971 at Watkins Glen would also be his last. He also triumphed in F2 races at Vallelunga in Italy and Nurburgring.

Le Mans provided the highpoint of the 1972 season where he finished second in a Matra which he shared with Howden Ganley of New Zealand. Cevert also took part in Can Am competition, winning at Donnybrooke and placing second at Elkhart Lake and third at Laguna Seca.

The 1973 season saw victories in the prestigious Formula 2 Pau Grand Prix and the Vallelunga 1,000km. On the Formula 1 front Cevert climbed the podium on seven occasions, dutifully staying behind team leader Stewart even when the opportunity was there to grab the win.

The promise of the first French world champion was cut short on a chilly day in October. Cevert was 29-years old. His sister Jacqueline is married to Jean-Pierre Beltoise, winner of the 1972 Monaco Grand Prix.

For more information on Paul Chenard and his work please visit: www.automobiliart.blogspot.com