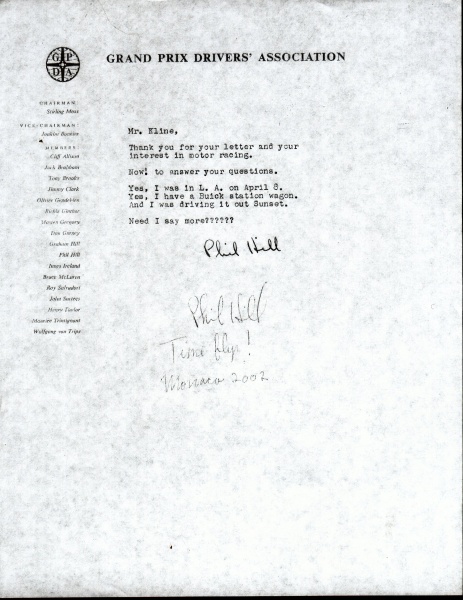 “When I was in High School out here in LA in April of 1962, I had an Austin Healy 100-6 and I was trolling for a race on Sunset Blvd. It is really a cool road course between Beverly Hills and the 405 Fwy. I got into a race with a guy in a 1961 Buick Special station wagon – the one with the little V8 engine that eventually ended up in Rovers. We were going at it hard and I could just keep up with this shitty American family wagon. When we got to Beverly Glen and stopped at the light – I looked over and it was Phil Hill – straight from winning the F1 World Championship. He turned left and I raced home, put pen to paper and wrote him a letter – do I have talent? How can I be race driver? etc, etc. Almost 2 years later I got a return letter – the really cool part of this is that I always treasured and kept the letter. I was racing in the Monaco Historics in 2002 and I know Phil was also entered. I brought the letter with me and he was kind enough to sign it again and he seemed to get a real kick out of it”.

F1weekly would like thank Jeff Kline for sharing this and other motor racing memories from his professional racing days in our podcast # 383.

Jean Sage came from a wealthy background and was a collector of Ferraris, making his competition debut at the age of just 20 years old co-driving a Ferrari 250 with André Simon. He also co-drove for Jean-Pierre Hanrioud and Gérard Larrousse while competing in Formula Three through the early 1960s. Then in 1973 along with Larrousse and Paul Archambeaud, they established the Écurie Elf team Switzerland. Archambeaud was a Swiss Mercedes-Benz dealer at the time. They began work building sportscars, but soon switched focus to the European Formula Two Championship series where they guided Jean-Pierre Jabouille to the 1976 championship.

When Larrousse was recruited by Renault, he hired Sage to run the newly forming F1 team in 1977. He oversaw the running of the team right from its debut at the 1977 British Grand Prix, through the first win at the 1979 French Grand Prix, the glory years of Alain Prost and René Arnoux—when the French squad was fought for the World Championships in 1982 and 1983—and its withdrawal at the end of the 1985 season. Sage stayed with Renault until the end of 1987, when it stopped supplying its turbo engines to other teams.

After Renault, Sage went to manage the running of Ferrari F40’s in the IMSA GT series through 1989 and 1990 with even Jean Alesi racing for the team. Into his later life he remained an active Ferrari collector and competitor in classic racing events, before his death on October 8, 2009.