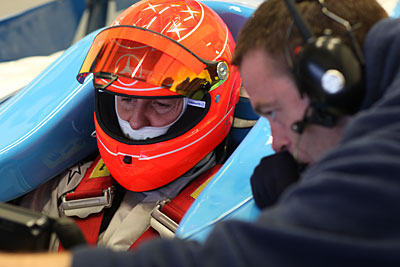 Michael Schumacher testing a GP2 car at the Jerez circuit in Spain.

The Renault team will be making use of a highly-developed, super-light seat belt this season after confirming a 3-year partnership with OMP Racing.

Cosworth announced that its engines for the 2010 Formula 1 season are now ready for shipping.

Nicole Scherzinger and Lewis Hamilton can confirm that they have decided to go their separate ways.

The FIA has decided to appeal the decision of the Tribunal de Grande Instance.

USF1 have applied to the FIA for special dispensation to miss the first few fly away races of the season. The team reportedly want instead to start their campaign at April’s Spanish GP.