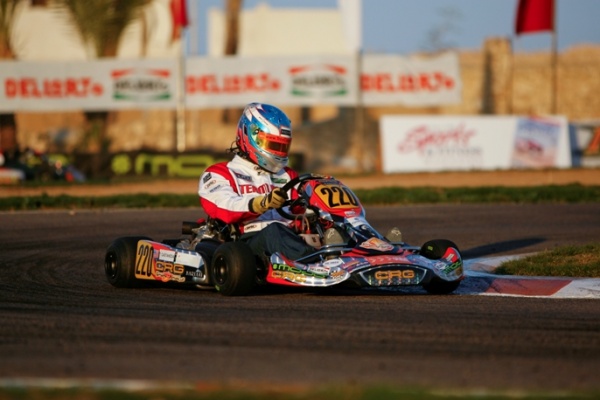 Venue for the 2009 finals was the Egyptian resort of Sharm el Sheikh.

Competing against over 200 drivers from 60 plus nations, Troy made it to the pre-finals where the top 34 racers competed for the final event. But his race was over before the opening lap was completed, thanks to an over-aggressive move by another driver resulting in damage to his kart and radiator.

As the first retirement in the pre-final Troy was left starting last on the grid for the main event. Rest of the story is best told by his blog on www.troycastaneda.com and is posted below with kind permission of Troy, who had to walk like an Egyptian for cash…

Having to repair the broken parts in less than a couple hours seemed like no problem until Troy and his mechanic realized that they had to pay in cash for the parts… Troy ended up having to run in his driving suit and shoes to find a nearby atm. He was able to find one across the street, but could not get his card to work. He then ran to another hotel down the street, but was faced with the same problem. Castaneda ran back to the track looking for help. With only 15 minutes left until he needed to be in parc ferme, Troy was running out of options.

There was a bank about a mile away in which he ended up taking a taxi to get to it. By the time he got what he needed and was heading back to the track, it was time for him to be at the grid. Running back to the pits with the parts needed for the repair, Diego quickly assembled everything and they made it to parc ferme just in time; the gates closed right behind them.

With a full field of the best drivers from around the world, Troy had his hands full. He had a decent start and at the end of lap 1, he was already in 28th place. His charge to the front was nothing short of a miracle; passing karts lap after lap. He was setting lap times that were consistently 2 tenths faster than the leaders. At the end of the 24 lap Rotax World Finals main event, Troy finished an impressive 5th place.

“I can’t believe it. I just focused on taking advantage of every passing opportunity,” explained Troy. “As soon as I caught up to someone, I would pass them right away. At the end of the race I had no idea what placed I finished until I got to the scales. I just want to thank everyone who helped me get here; this was a fantastic experience and I learned a lot. I’m looking forward to next year! Thank you!”