The 2010 Daytona 500 took over six hours to complete as the drivers battled the customary cautions and two red flag situations, caused by potholes between the first two turns of the 2.5-mile track.

When all was said and done and 208 laps run, Jamie McMurray scored the biggest win of his career and shed tears of joy in the victory lane. The wild finish to the 52nd running of “The Great American Race” saw a two-lap dash to the finish line. These were the only laps he led, the fewest by a winner of this race.

Kevin Harvick looked strong and on his way to his second Daytona 500 victory before the final caution came out. At the re-start McMurray, with a little help from his ex-teammate Greg Biffle, surged ahead.

The Joplin, MO, driver’s biggest threat came from #88, the AMP machine of darling of the crowd, Dale Earnhardt Jr. “Little E” was electrifying on the final two laps, charging from tenth to racing McMurray to the checkered flag.

“I looked in my mirror and saw the 88—I’ll be honest, I was like, ‘Crap, this guy has won a lot of races here. His family has an incredible history here,”’ McMurray was quoted on Yahoo Sports. “I believe everything happens for a reason. I just was like, ‘I hope this isn’t his turn to win the Daytona 500, I hope this is mine.”’

Ganassi’s teams have now won all three major races in the country, others being Indy 500 and the Daytona 24-hours, feat matched only Penske Racing.

In third place behind the two Chervrolet drivers was Greg Biffle in a Ford.  David Reutimann drove the highest placed Toyota in fifth position.

McMurray’s teammate Juan Pablo Montoya was 10th. Scott Speed, another F1 refugee, was among the race leaders and finished 19th.

The inaugural Daytona 500 in 1959 was won by Lee Petty. His son, Richard, won the race a record seven times. Mario Andretti, in 1967, remains the only non-US born racer to win the event. 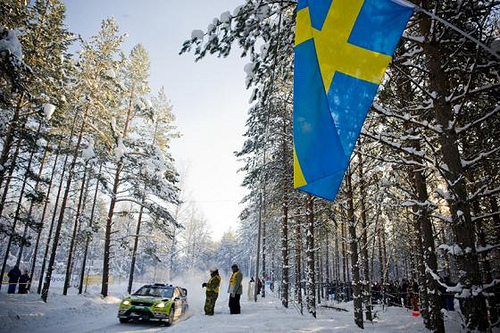 After a careful approach through the final snow-covered stage, Hirvonen and co-driver Jarmo Lehtinen leapt onto the roof of their car at he finish control to celebrate their win. “It’s absolutely fantastic!” said Hirvonen. “And I’m really happy it’s over after those last few stages; you can’t imagine how nervous I was in there. It’s a perfect start to my year, I’ve never won the first round before, but after last season I’ve got one more year of experience. Now I plan to carry on like this. It’s a new game in Mexico and I can’t wait to get started again.”