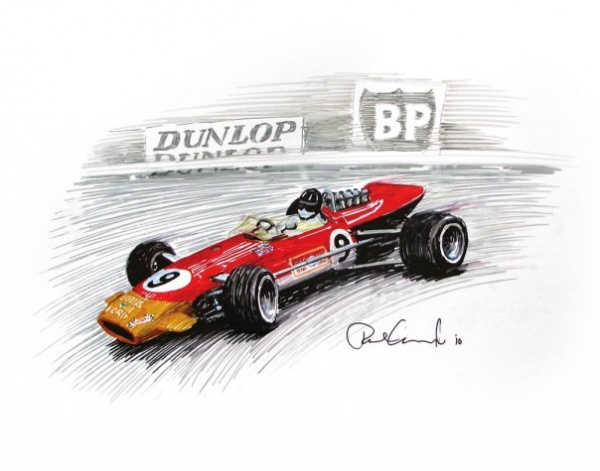 Colin Chapman of Team Lotus turned a new leaf in the commercial side of Grand Prix motor racing when he brought tobacco sponsorship to the sport in 1968.

His great friend and Champion Jim Clark would give the British Racing Green Lotus their final victory on New Year’s Day in South Africa to start the 1968 Formula 1 season. Tragically, it would turn out to be his final win also. Three months later he was killed in a Formula 2 race at Hockenheimring in Germany.

Imperial Tobacco provided Chapman’s team a breath of fresh air and much finance by slapping their Gold Leaf-brand logo on the 49.

Graham Hill, ex marine engineer and member of London Rowing Club, gave a much needed boost to team’s morale by winning the second race of the season, the Spanish Grand Prix at the new Jarama circuit near Madrid.

Round three was in the streets on Monte-Carlo, and Hill scored his fourth Monaco Grand Prix victory, fifth and final would follow the next season. This was the first race in which two Gold Leaf sponsored cars were entered. Hill’s teammate was Jackie Oliver, his first appearance in a Formula 1 machinery would end in a crash on the opening lap. Oliver was later involved in Shadow and Arrows F1 operations.

The 1968 Monaco Grand Prix is also remembered for the thundering sound of Matra V12, which made its first appearance in the back of Jean-Pierre Beltoise’s blue Matra Sport entry. Four years later the ex-motorcycle champion would score his first and only victory in Principality’s precipitation.