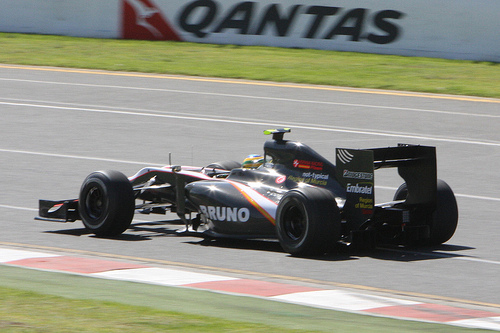 Will the Australian Grand Prix bring the excitement back to Formula 1?

Mark Webber goes to the top of the time sheets in Saturday practice.

A look at the history of the Australian Grand Prix:

The first Formula 1 Australian Grand Prix was staged in 1985 as the season finale. The first winner here, and scoring his final Grand Prix win, was Keke Rosberg in a Williams Honda.

Jacques Laffite and Philippe Streiff were second and third respectively for Ligier, powered by Renault.

The race took place on the streets of Adelaide.

The 1986 Australian Grand Prix is remembered for Nigel Mansell’s championship hopes going up in smoke after tire fire. Both him and teammate Nelson Piquet lost a certain championship to surprise race winner Alain Prost.

In 1987, Gerhard Berger led a Ferrari one two with Michele Alboreto second. Dr Jonathan Palmer, who now runs Brands Hatch and Formula 2 championship, was fourth in his Tyrrell.

In 1988, Alain Prost led a McLaren one two with Ayrton Senna second. This was the last Grand Prix of the turbo era.

The 1989 race had a lot of rain and some surprises. Winner was Thierry Boutsen in a Williams over Alessandro Nannini in a Benetton. Satoru Nakajima was fourth in a Lotus Judd, and believe it not, set the fastest lap of the race.

This is the race which provided the famous video of Ayrton Senna running into the back of his old British F3 buddy Martin Brundle.

Race was stopped at the two hour mark.

1990. Nelson Piquet in a Benetton winning over the Ferraris of Il Leone Nigel Mansell and Alain Prost.

1991. Only 14 of 81 laps were completed when the race was stopped due to heavy downpour. Senna was the winner with Mansell second and Berger third.

1992. Winner was Gerhard Berger in a McLaren. Fastest lap was set by second place driver in a Benetton by the name of Michael Schumacher. And this weekend Ross Brawn will be singing “baby got back”. And I am sure in a competitive car Michael will be Sir Mix A Lot.

Martin Brundle, who will be doing the grid walk for the Beeb on Sunday, was third back in 1992 in his Benetton.

We continue the Australian Grand Prix rapping with the 1993 edition.

Final Grand Prix win in the life and time of Ayrton Senna, his last drive for McLaren before heading for Williams. Alain Prost was second in a Williams ahead of teammate, our Damon, who set the fastest lap. Jean Alesi found some moteevation in land down under and finished fourth in a Ferrari. Rubinho was in this race also, finishing 11th for Eddie Jordan.

1994. Nigel Mansell takes his final win in the final race of the season in a Williams. Berger was second in a Ferrari. Martin Brundle was third in a McLaren Peugeot. Others in this race included Heinz Harald Frentzen, Mika Salo, Alex Zanardi and F1 reject favorite Jean-Denis Deletraz.

Damon Hill was not in the mood to win the world championship and crashed into Michael Schumacher, who, according to Willi Weber, was shell shocked to become the first German weltmeister.

1995. Final race in Adelaide won by Damon Hill in his Williams. Ligier of Olivier Panis was second. In practice Mika Hakkinen survived a near fatal crash. And man who qualified 15th did not start. Luca Badoer.

1996. Race was walk in the park for Williams team in Melbourne. Dramatic Grand Prix debut for Jacques Villeneuve from pole position and second place in the race. Race was won by teammate Damon Hill.

Fisico was fourth for Benetton and Rubinho fifth for the wee Scot, Stewart Racing.