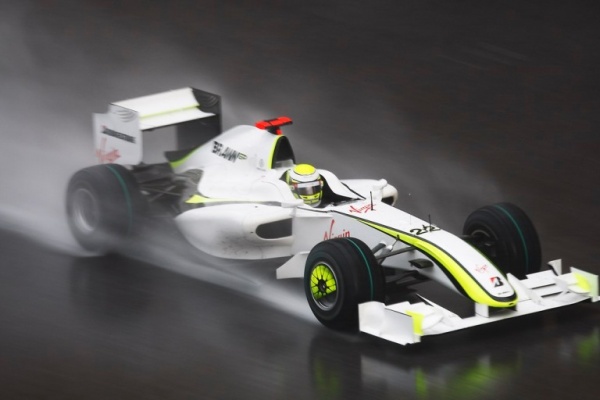 Smooth sailing –  Sepang 2009. Button and Brawn boat sailed to an easy wet victory in the Malaysian Grand Prix last year. This year the charge of the Red Bull brigade has been derailed by mechanical issues, handing Fernando Alonso debut win for Ferrari in Bahrain, and last weekend Button was the beneficiary when Vettel dropped out while leading.

This weekend’s race at Sepang is expected to have showers again, thus increasing the possibility of an unexpected winner.

Michael Schumacher and Nico Hulkenberg, the experienced and rookie rain meisters of Germany, could sure use a slippery advantage for a better showing.

Remember Monza 2008? Vettel’s sheer brilliance in the wet and Red Bull’s speed should allow the young German to notch his first win of the season. Still waters run deep and so does the talent for wet weather driving with Barrichello and Hamilton.

Alonso scored his first career pole position here in 2003 and scored an impressive victory in the 2007 race with McLaren, when the sun was still shining both on the track and driver/team relationship.

The inaugural Malaysian Grand Prix in 1999 was won by Eddie Irvine “with a little help from my friend”. Schumacher started from pole and allowed Irvine to take the lead, hoping to help his teammate for the championship against Mika Hakkinen.

Kimi Raikkonen, the “Ice cream man” from last year’s event won his first F1 race here in 2003. The Schumacher brothers bagged four wins at Sepang, three for Michael and one for Ralf.

F1weekly podcast will bring you season long coverage of F1 and feeder series like F2, F3 and GP2 & 3 championships.