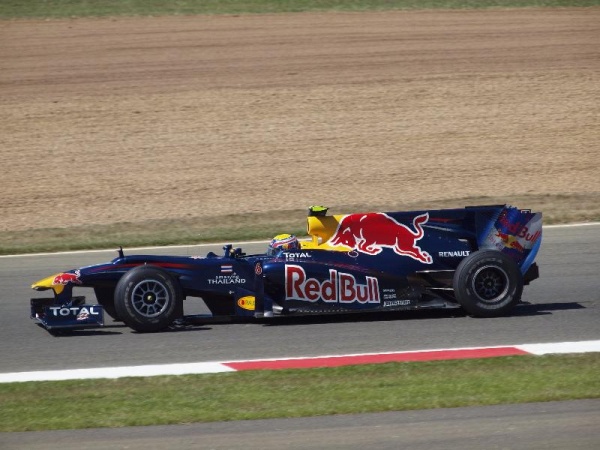 Mark Webber takes a great victory for a number 2 driver at Silverstone.

Vettle goes off at Becketts, pits with a puncture and finishes in seventh spot.

Fernando Alonso continues his run of bad luck with a drive through penalty.

Webber grills a hot one for number two! With mom and dad watching Australian Mark Webber stamped his authority by winning the British Grand Prix in dominating fashion, his third of the season. Following his flip in Valencia two weeks ago Sunday’s victory puts him back in the championship hunt, ahead of teammate Sebastian Vettel but behind the McLaren duo of Lewis Hamilton and Jenson Button.

“Not bad for number two driver” was his comment after being congratulated by team manager Christian Horner.

“Poetic justice” was served in the words of Eddie Jordan, the flamboyant ex-F1 team owner and now a talking head for BBC. This was in reference to front wing controversy from Saturday.

The charge of the Red Bulls started from the front row, Webber won the stampede to the first corner while pole-sitter Sebastian Vettel suffered a puncture on the opening lap. His chances for victory slaughtered Vettel made a strong recovery to finish seventh, passing fellow Geman Adrian Sutil in the closing stages of the race.

McLaren’s Lewis Hamilton delighted home fans by finishing second and staying at the top of the championship table. Nico Rosberg completed the podium for Mercedes.

Jenson Button was fourth after calling his McLaren “un-driveable” in qualifying. Rubens Barrichello was fifth for Williams.

The heat is on at Red Bull and many are predicting love-fest at McLaren will also fade fast. Red Bull seems to have the best package at the moment but cage rattling between drivers and management, seen by many as tilting towards Vettel, may deliver the championship to one of the McLaren boys.

Greetings and on time regards from California.