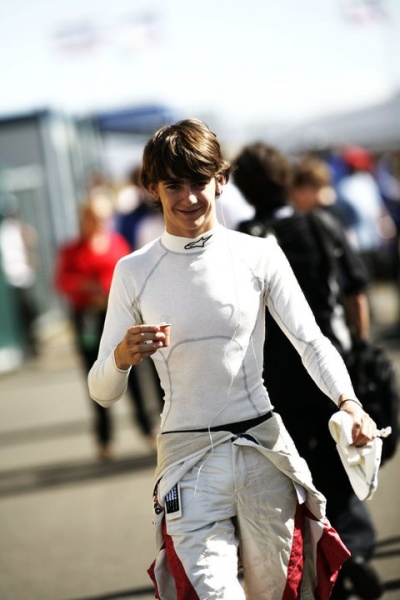 Gutiérrez on the go. Four decades ago Pedro Rodriguez drove to victory at the fabled Spa-Francorchamps to win the 1970 Belgian Grand Prix in a BRM. That was the last time an F1 race was won by a driver from south of the border.

The wins and winds of change are coming soon to a track near you.

Meet Esteban Gutiérrez, the new “Speedy Gonzalez” from Monterrey, who has been making headlines not only on the Mexican radio but on racing tracks both sides of the pond.

Basketball’s loss was motor racing’s gain, an injury while enjoying his first love sidelined Gutierrez and landed him in the racing lane. The kid was quick in karting from the start, and in 2006 at the age of 15 won all five races in the Camkart Challenge Mexico, and finished fourth in the Mexican Grand Nationals in Zacatecas.

Gutierrez made his single-seater racing debut in the 2007 Formula BMW US Championship. The opening round was at Miller Motorsports Park near Salt Lake City, and he was pepper quick from the start claiming pole positions for both the opening races.

The season saw him take four victories and nine pole positions to claim Rookie of the Year title. The Gutierrez “Gong” show sailed across the Atlantic to compete in the new Formula BMW Europe after the unification of the German and British iterations.

Podium finishes in the opening two races at Barcelona was a taste of things to come for the competition. Seven victories, including six in a row, sealed the championship for the Mexican driver.

Kaufmann opined, “Gutierrez is as quick as Hulkenberg.” The German won a championship in every championship he competed in and is now enduring a tough rookie season in F1.

Gutierrez knows the feeling. For the 2009 season he by-passed British and German F3 National Championships and took the plunge into the cut-throat world of F3 Euro Series.

Racing against much more experienced drivers Gutierrez could not get the results he wanted, “I was trying too hard,” he explained last year at the season finale at Hockenheim. The determined driver was able to secure a top ten finish in the championship, highlight of which was a pair of podium finishes and respect of fellow competitors, both on and off the track.

From the minds of Bernie and Bruno Michel comes the new feeder series to GP2, the final frontier before the promised land of Formula 1. Gutierrez decided to stay with French ART team for the 2010 season but switch focus to the new GP3 Series.

The smart move is already paying dividends and history may be repeating itself. Just like his first racing season in Europe in the 2008 Formula BMW Championship, Gutierrez got on the podium in his first race and has been on top of his game and podium since then, winning three opening races of the weekend in a row.

The GP3 round at the British Grand Prix saw the very best of Gutierrez, he secured pole position by over half a second and dominated the race, resisting strong pressure early in the race from Rio Haryanto and recorded the fast lap of the race on the final lap.

Sunday’s reverse grid saw the man from Monterrey come from his eighth starting position to challenge pole-sitter Mirko Bortolotti for second place. Their thrilling battle was joined by Gutierrez’s ART teammate and America’s next and brightest F1 hopeful, Alexander Rossi.

On the final lap battle was so intense it was obvious somebody will pay the price. Initially, it looked like Gutierrez was the victim as he was pushed off-track by Bortolotti, allowing Rossi to race to a podium finish. Gutierrez still collected valuable points from his fourth place, which became a podium finish after Bortolotti was penalized 20 seconds which dropped the Italian to 13th.

The season is half over and Gutierrez goes to Germany in good ‘gesundheit’, leading the championship with twice as many points as second place driver, Rossi.

Does Gutierrez think championship is in the bag?

He laid out his game plan, “No, definitely not until the last race when it is done. You are really focused on each race to try and do your best and push forward and enjoy the season.”

Push forward is what he does best, and taste of success may have a Mexican flavor at Monza.