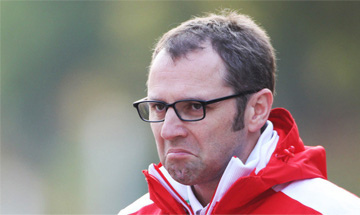 Stefano Domenicali believes as Fernando does Ferrari can win the Championship.

“Anyone who does not believe that we can win the World Championship would do better looking for another job,” said Domenicali on the team’s official website.

No-one here is giving up. There are still nine races to go and anything can happen.

We will have to do our job perfectly, that is to say the Ferrari way, and then the results will come.”

Stefano Domenicali : born May 11, 1965 to a prominent banker in Imola. He studied business administration at Bologna University, graduating in 1991. He always believed that he was destined to a career in motorsport due to his birthplace.

Domenicali has only worked for one company, Ferrari. He joined Ferrari, immediately after graduation in 1991, where he worked in company’s fiscal administration. Between 1992 to 1994, he was race director at Mugello and was involved in MotoGP, DTM and other racing series. In 1995, he was appointed head of personnel in Ferrari’s sporting department and was also involved with sponsorship liaison, before being promoted to Team Manager in December 1996. He remained there till January 2001. After a brief stint as Logistics Manager, he became the team’s Sporting Director in 2002. On November 12, 2007 Ferrari announced Stefano Domenicali would take on the role of Director of the Ferrari Formula One team, a position previously held by Jean Todt, and became team principal in 2008. The team has since been in decline, failing to win the Driver’s World Title in 2008, and neither the Drivers or Constructors World Title in the 2009 Formula One Season, finishing a distant fourth overall, behind the Brawn GP, Red Bull Racing and McLaren-Mercedes teams respectively, the latter of which endured a poor start to the season but still recovered to overtake Ferrari in the overall standings after the final Grand Prix of the season. Ferrari have endured a tough start to the 2010 season also, falling behind Mclaren and Red Bull Racing in the fight for the title, with Massa accruing 3 consecutive non-points finishes up to the 2010 British Grand Prix.