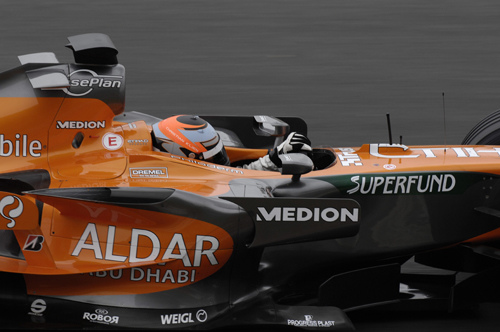 Born in Hohenems, Klien started his motorsport career in his early teens. He raced in karting championships in both Austria and Switzerland, before moving to Formula BMW. After winning several titles in lower Formulas, Klien moved into Formula One, driving for the Jaguar Racing team, alongside Mark Webber. At the end of 2004, however, Jaguar sold its Formula One team to Red Bull, which renamed it Red Bull Racing. In an unusual arrangement, Klien shared a race seat with Italian Vitantonio Liuzzi. He stayed at Red Bull for 2006, whilst Liuzzi moved to the Red Bull junior team, Scuderia Toro Rosso.

After an unsuccessful 2006, Klien’s old teammate Mark Webber replaced him for the 2007 season. Klien was offered alternatives to Formula One for 2007, including driving in the ChampCar series, but he refused and aimed for a seat in Formula One. He secured the test driver’s seat at Honda, despite competition from other drivers, including Gary Paffett.

On 2 February 2008 Klien signed as BMW Sauber’s reserve and test driver for the 2008 Formula One season, alongside Estonian Marko Asmer.

Klien remained in the position of BMW Sauber’s test and reserve driver for 2009.

For 2010, Klien was understood to be a target for Sauber before the seat went to Pedro de la Rosa.

Klien was then tipped to become Hispania Racing’s reserve driver despite being second favourite to ex-US F1 man José María López but neither Klien or López got the seat. It went to former Super Aguri F1 and Spyker F1 driver Sakon Yamamoto. However, he was later signed by Hispania as well as Yamamoto. He took part in his first Grand Prix weekend for three years at the 2010 Spanish Grand Prix, where he drove in the first practice session in place of Karun Chandhok. He replaced Chandok again at the 2010 European Grand Prix where his session was made difficult by problems with his car. He is being linked with a race seat with Renault for 2011.