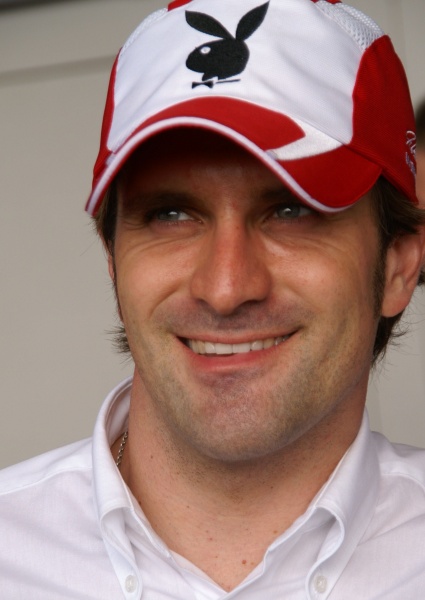 This Bunny has seen some serious hot laps! Markus Winkelhock has every reason to smile, sponsorship from Playboy and plum Audi ride with Team Rosberg in DTM, the German Touring Car Championship.

As an 18-year old he finished second in the 1998 Formula König Championship and raced in Formula Renault Championships in Germany and Europe in the following two seasons.  In three season of F3 competition he scored six wins and placed fourth in the 2003 F3 Euro Series, ahead of names like Timo Glock, Nico Rosberg and Robert Kubica.

His first foray in German tin-tops came in 2004 and he returned to single-seaters in 2005, competing and winning three races in World Series by Renault and claiming third position in the championship. Since the 2007 season Winkelhock has been a regular feature on the DTM landscape.

His day of days came in the rain and in his Formula 1 debut at the Nürburgring. The 2007 European Grand Prix was about to start when the Spyker team instructed Winkelhock to come in for wet tires at the end of the formation lap.

F1 audience all over the world watched pole-sitter Kimi Raikkonen and company slipping and sliding on the opening lap, and even more stunning was scene of Markus Winkelhock leading the very first lap of his very first Formula 1 Grand Prix! The rain disappeared and with it the brief one-race F1 career of Markus Wilkehock.

At least he can tell his grand kids and Bunnies, if they are still around, about the day he led a Formula 1 Grand Prix at the Nürburgring.