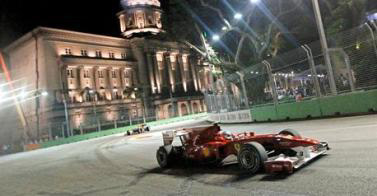 Alonso sails to second successive win at Marina Bay and turns the championship tide. It’s moon over Oviedo and Maranello.

Fernando Alonso won the season opener in Bahrain. But that was Sebastian Vettel’s race before he ran into mechanical issues.

Alonso won again at Hockenheim in Germany. But that was teammate Massa’s race before he ran into ‘Alonso is faster than you’ mental issues, not of his own making but a polite ‘don’t call us, we’ll call you’ with (team) orders which invited a $100,000 fine from the FIA.

From Monza to Marina Bay on Sunday, there were no ifs and buts about the Spaniard’s sensational drives. Capitalizing on Lewis Hamilton’s self inflicted retirement before the opening lap was not even half over, Alonso took care of the second McLaren at Monza in the pits; thrilling the Tifosis who packed Parco Monza every September for their beloved red machines from Maranello.

Singapore Grand Prix started the final five fly-away races which will decide the 2010 World Championship. No less than five drivers are in with a chance. Interestingly, it is the Red Bull drivers, with the most dominant cars through most of the season, who are looking for their first title.

Pre-and-early season favorite Sebastian Vettel appears to have become his own worst enemy, failing to score after clashing with teammate Webber and then with Button in previous rounds.

Sunday Vettel chased Alonso all race long, and despite deployment of safety car on more than one occasion, was not able to make a Hamilton-style all-or-nothing assault on Alonso to grab the lead.

Vettel can write his name in history books again if he is to become world champion this year; he will replace Lewis Hamilton as the youngest ever.

Red Bull’s other charge, Mark Webber, is still hanging on to his championship lead, albeit with only nine points over “Nando.” The points he lost when he took to the air in Valencia after running into the back of Kovalainen’s Lotus are now hurting him.

Webber could have lost more ground on Sunday but was lucky his collision with Hamilton only took the McLaren driver out. His second successive dnf, the fact that Alonso took maximum 50 points from the same two races will be very much on Hamilton’s mind at the next round at Suzuka.

Webber’s podium finish in third place in Singapore could be crucial in his quest to become the first Australian world champion since equally gritty and determined Alan Jones in 1980.

The inaugural Korean Grand Prix next month appears to be sinking in deep ‘kimchi’ and even the F1 Supremo, the “Big E” is now expressing his doubts. In F1 they say He knows what will happen before it happen. If the race does become a Korean barbeque and flames out, this could turn out to be a Happy Meal for Mark Webber. He will have to protect his nine-point lead in only three more races.

The other protagonists, Alonso, Button, Hamilton and Vettel will fight out for wins in the remaining races and that may allow cruise-and-collect mode for Webber to make his Mark!

Button finished fourth in Singapore but like teammate Hamilton had nothing for Red Bull and the Ferrari of Alonso.

In the last five races Alonso has out-scored all other challengers. Few weeks ago the season looked lost for Scuderia, now the focus is to clip the wings of Red Bull drivers and re-live the remaining races like the 2007 season, where championship was snatched from the jaws of both McLaren drivers. Ironically, Sunday’s winner in Singapore was one of the victims back then.

It’s full steam ahead for Alonso and Scuderia Ferrari. Massa may prove to be a key signal man and take away important points from the challengers. 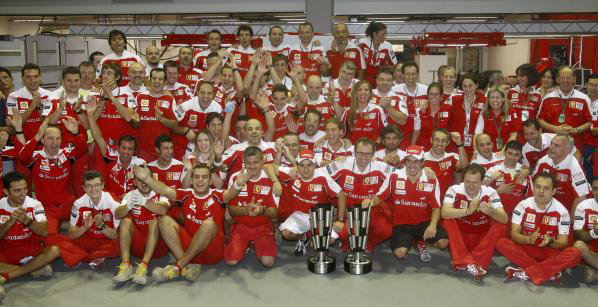 In the post race interview Alonso was asked if the smart money should be on him winning his third world title.

He replied, “I think it remains very tight. All five contenders still have the same possibilities. Mark has a little bit more with still some margin to have a bad weekend not putting at risk the contention of the championship. For the others we need to keep catching if we can.

“We will do our best. We do not know if it will be enough to become champion in Abu Dhabi. But we will give 100 per cent. Hopefully it is enough but people can be sure we will fight until the end.

Many a belly will be turning and dancing as the Arabian night falls and so does curtain on the 2010 FIA Formula 1 World Championship in Abu Dhabi.