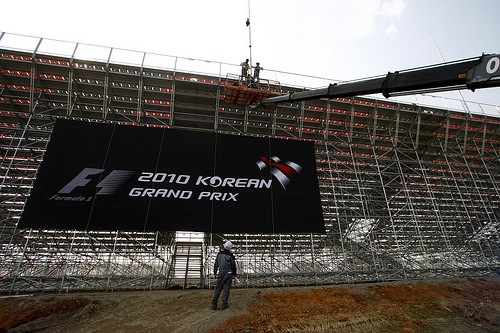 Korean Grand Prixview with our own F1 Femme fatal Desiree.

The young man from Maastricht is rapidly making his mark in motor racing. In 2009, his first season in single seater racing, he scored his maiden win at Silverstone and won Rookie of the Year honors in Formula BMW Europe Championhsip. This year he captured the title with Josef Kaufmann Racing at the final race of the season at Monza after a relentless pursuit all season long.

Robin, fresh from his championship victory plus a bonus win at Spa in the Formula Renault race, was kind enough to take time and answer questions for the worldwide F1 Weekly familia.

Q: Robin, congratulations on winning the championship in the final race of the season, how long did the party last in Monza?

A: “About one week. First with my family then with friends.”

Q: Last year you were Rookie Champion, what did you learn most from your first season of motor racing that helped you in winning the championship this season?

A: “Hard to say. Because last year I learned a lot also because I was driving in the front of the field so I knew how to handle to pressure. I think that is the biggest point.”

Q: What were the highs and lows of the season for you?

A: “Well the low was for sure the very first race of the season. I crashed in the first race which was not my fault. But that’s racing.

“My high was the second race in Zandvoort in the rain where I won in front of my home crowd with 9 second advantage. That was something special in such a high level of racing.”

Q: Championship challenger was Jack Harvey who led in points from round one in Barcelona, and you have been racing against him since karting days, what was the exchange of words between the two of you after the final race?

A: “Well first of all we have a lot of respect for each other. After the final race he just congratulated me. He is a really good racing driver and I like to drive against him in the races. I respect him a lot.”

Q: You raced with Josef Kaufmann Racing, Nico Hulkenberg and Esteban Gutierrez also won Formula BMW championships with them, how important was their role in developing Robin Frijns as a racing driver?

A: “I don’t see them every weekend but they drove with the car few years ago, so they gave me the basic setup of the car. If you see it that way. But we also changed the car a bit to my driving style.”

Q: In racing do you prefer competition from a driver of another team or from your own teammate, which is known as ‘cage rattling’ in F1weekly world?

A: “If its your teammate you can check his data and compare it to yours. But if it’s a driver in another team you can’t. But I prefer it with a driver of another team.”

Q: What is your favorite track and city in Europe?

A: “Favorite track is Spa. Because it has everything in it, fast corners, long straights and slow corners. Favorite city is Maastricht where I live because all my friends live there and it’s a nice city.”

Q: Have you ever been to a racing school before or since your started racing?

Q: One of your teammates was also Dutch, Hannes van Asseldonk, how did he do in your opinion as a rookie this year?

A: “First few races he was struggling a bit. But every time he went faster and faster. In the end in the last couple of races like Monza he was one of the fastest drivers on the track, so he learned a lot in his rookie year. I also help him a bit because it’s always better the drive with your teammate in the front of the field.”

Q: What is the best advice you can give to young drivers who are in karting and want to move into single seaters next season?

A: “It’s a complete different way of driving with a car then it is with a kart. It does not mean that if you are fast in the kart that you are fast in the cars. Because if you jump in to the car you start from zero again and you have to learn so much.”

Q: Do you have any racing heroes and who is your favorite in Formula 1 today?

A: “My racing hero is Senna; he was just the best. But my favorite racing driver today is Kobayashi because he is going for it, sometimes it goes wrong. But if its not he is a pleasure to watch.”

Q: No Dutch driver has ever won an F1 race, what will it mean to you if you could become the real Flying Dutchman in Formula 1?

A: “It means a lot. If you are the first man of all Holland it’s really something special.”

Q: What would you like to say to members of F1 Weekly familia?

A: “Keep a good eye on the Flying Dutchman! J”

For more information on Robin and his career please visit www.robinfrijns.com