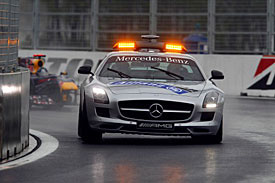 Light, camera and little action: The inaugural Korean Grand Prix witnessed the slaughtering of Red Bulls and the rise of the Red Matador. The safety car led more laps than race winner Fernando Alonso. The Spaniard is not complaining though. He now will take a stab at his third world title.

With only two races to go the championship may be influenced by decisions made in the Austrian mountains. While the world wants Red Bull to throw its weight behind Webber and give wings to his championship efforts, the words of wisdom from powers that be still talk of both drivers in with a chance of winning the championship.

Sebastian Vettel, the Chosen One, has the pace and package to win the remaining two races but can still lose the big prize to the Oracle of Oviedo.

Alonso and Lewis Hamilton were both victims of their own making in 2007.

Three seasons later Alonso could again fall victim to Hamilton if the McLaren driver finishes ahead and take precious points from his ex-teammate in Brazil (and we have seen this movie before) or in the final race in Abu Dhabi.

Webber is left out to grill his own championship.

Imagine the scenario, Red Bull wins the final two races and championship goes to Ferrari driver. This will only result in some serious yoddling in the Austrian mountains during the off-season.