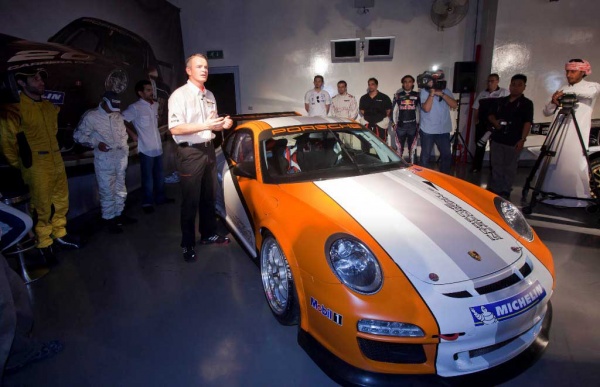 Porsche’s long and illustrious record of involvement in motor sport was underlined today during an official press conference at Dubai Autodrome to preview the second season of the Porsche GT3 Cup Challenge Middle East.

On display alongside the latest version of the Porsche GT3 Cup car, which is making a world premiere in the series, were some of the most famous racing models ever built, including Porsche’s first car designed for motorsport more than half a century ago, the 550 Spyder built in 1954. All in all, six cars were flown to the UAE from their permanent home at the Porsche Museum in Stuttgart, Germany for a rare public appearance on 6th November at Porsche Centre Dubai.

Fast forward to today’s latest state-of-the-art Porsche racing machinery, the 450 horsepower 2011 GT3 Cup car was driven for the first time in Dubai yesterday when Prince Abdulaziz and several other drivers from the 2010-11 season starting line-up had their initial test sessions behind the wheel.

“Like the drivers, we’re all excited about the new season ahead, especially after the excellent start we enjoyed last year which exceeded our expectations,” said Andre Oosthuizen, Marketing Director, Porsche Middle East and Africa.

“Porsche is proud of its racing heritage, and we’re particularly delighted to be able to showcase some of the classic cars which have enabled us to develop such an outstanding reputation over the last five decades.”

“At the same time, we’re delighted to introduce the latest GT3 Cup car. We will be the first region to put the new car through its paces in our series which, we believe has all the right ingredients to go from strength to strength in the years ahead.”

Walter Lechner, the former racing star now driving the Porsche GT3 Cup Challenge Middle East as head of Austrian-based Lechner Racing, said: “I used to drive Porsche cars at Le Mans, but I’m just as excited to be part of this championship as a manager. And I have to admit I was a little jealous of the drivers when they went out in their new cars for the first time yesterday.”

“The 911 GT3 Cup car offers outstanding performance and we look forward to breathtaking fights in a competitive second season.”

Following the opening two rounds in Abu Dhabi, the 2010-11 series, which is sponsored by Michelin and Mobil 1, continues with further rounds split between Yas Marina Circuit, Bahrain International Circuit and Reem International Circuit outside Riyadh, where it made history last season as the first international circuit race event ever staged in the Kingdom.

Determined to make a strong start to the new season on home territory, Al Qubaisi gained invaluable experience in the summer competing in the Porsche Mobil 1 Super Cup and aims to add consistency to his obvious natural pace. He will be joined by two other UAE drivers. as Ibrahim Salloum and Musaed Al Murar make their series debut in Abu Dhabi.