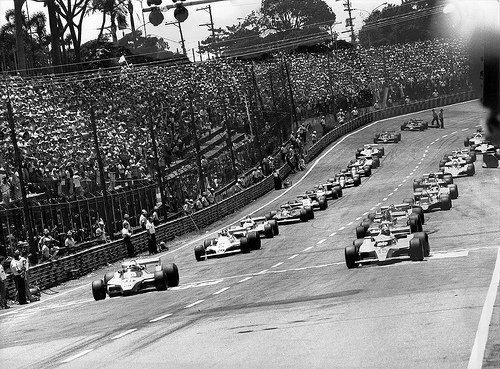 Following team orders in Brazil will result in prison time.

Autodromo Carlos Pace: The old version of the Brazilian circuit incorporated most of the tight and twisty infield still present today, along with a balls-out, high-speed section. The original layout consisted of four fast corners, split up by long straights, in which the cars would remain flat out for around 20 seconds. With significant bumps throughout the lap, the track was considered very dangerous – especially by 1980 when cars were running ground-effect aerodynamics. That, and the encroaching favellas around the circuit, saw the Brazilian Grand Prix move to the more glamorous Jacarepagua circuit in Rio de Janeiro. When it returned in 1990 a $15 million redevelopment plan had stunted the circuit to today’s layout. Interlagos literally means ‘between the lakes’ referring to two large manmade lakes built in the early 20th century to supply the city with water and electricity. The land on which the circuit stands was originally bought in 1938 by two property developers who intended to build houses on the site. When they discovered that the site was not suitable they decided to build a circuit instead, and as Sao Paulo continued to grow at an astounding rate it was not long before the track was surrounded by houses.

Owing to the success of Emerson Fittipaldi, the country expressed an interest in hosting a race. Interlagos held two non-championship races in 1971 and ’72 before joining the full championship calendar in 1973, and the circuit proved to be a lucky one for the local racers Fittipaldi, Carlos Pace and Carlos Reutemann who all won races there. In fact, it was the scene of Pace’s only F1 win, and following his death in a plane crash in 1977 the circuit was renamed in his honour.

In 1978 the Brazilian Grand Prix moved to the Jacarepagua circuit in Rio de Janeiro, but it returned to Interlagos the following year. In 1981 it was moved to Rio permanently as the organisers felt the slums of Sao Paulo were at odds with the glamour of F1. It would take a promise of a US$15million redevelopment programme to bring the race back in 1990.

The circuit itself is one of the very few circuits on the calendar that runs anti-clockwise, and this, combined with its bumpy surface means it is considered hard on cars and drivers alike. The resurfacing of the track in 2007 ironed out most of the worst bumps but the circuit still retains the character as it follows the lands contours making it an interesting circuit to drive.

Despite the lack of a real Brazilian hero since Senna’s death the passion of the local fans has not diminished and the race continues to draw good crowds.