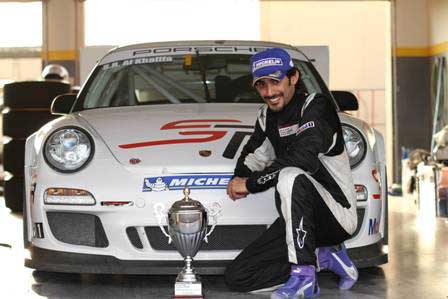 Bahrain. Bahrain’s Sheikh Salman Bin Rashid Al Khalifa has set his sights firmly on a title triumph in the Porsche GT3 Cup Challenge Middle East, which launches its 2010-11 season this weekend alongside the deciding round of the Formula One World Championship in Abu Dhabi.

Looking ahead to the start of the new campaign in the UAE capital, the 2009-10 championship runner-up said: “After last season I’m focused on winning. I’ve prepared well, I’m in very good shape and I can’t wait for the new season to start.”

The first two rounds of the new season on Saturday and Sunday are the official support races for the 2010 Formula One Etihad Airways Abu Dhabi Grand Prix at Yas Marina Circuit.

Sheikh Salman earned a place in the record books there 12 months ago when his victory in the Supercars Middle East Championship made him the first ever race winner at the venue.

Sheikh Salman and the rest of the 16-driver line-up will be at the wheel of the brand new 450 horsepower 2011 911 GT3 Cup car which will be making its first competitive appearance anywhere in the world in Abu Dhabi.

If he can make a solid start in the UAE he will certainly fancy his chances when the series moves on to his home track at Bahrain International Circuit for rounds Rounds 3 and 4 on December 2-3, with Rounds 7 and 8 to follow there on 18-19 February.

In addition to action in Abu Dhabi and Bahrain, the 2010-11 series, which is sponsored by Michelin and Mobil 1, also takes in Reem International Circuit outside Riyadh, where it made history last season as the first international circuit race event ever staged in the Kingdom.