Sebastian Vettel does it! With pole in Abu Dhabi.

Mark Webber could not do it and only managed fifth place.

Lewis Hamilton puts his McLaren on the front row.

Fernando Alonso in perfect position with third on the grid.

“I think we are more or less in the same situation as we were two days ago before first practice,” he said. “We know the situation, we know the four contenders.

everything is on tomorrow’s race, anything can happen and we saw in last few events things changed – in Korea the Red Bulls were very strong and lost the race with mechanical issues, in Brazil we saw some problems with pitstops.

In the race anything can happen, we need to complete 55 laps without any problems. It will be a tough race, a long race, but we are in a position where we are very strong.

Obviously it was a tough qualifying for everyone, changing positions in Q2 and Q3, you never know how competitive you are until Q3 finishes.

The first attempt was not great, traffic in the first sector so I knew with the second tyres there was some potential to come so I pushed to the limit and third place is great.” 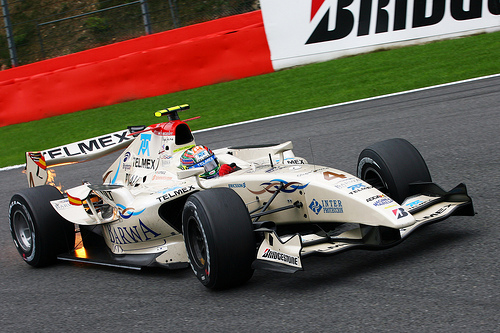 Perez dominates Abu Dhabi feature race Mexican secures second in championship Sergio Perez crushed his rivals with an unmatched display of speed on his way to a dominant win in today’s feature race in Abu Dhabi, securing second place in the championship as he easily led the way home, greeting the chequered flag over twenty seconds ahead of Oliver Turvey and Sam Bird. The Mexican’s victory was set up when the lights went out: polesitter Turvey bogged down slightly as he got away, allowing Perez an easily line into the lead at turn one.

Teammate Davide Valsecchi was also slow to get away, handing Romain Grosjean a simple line inside and through for P4, which improved by one when Fabio Leimer and Turvey touched wheels at the first corner, with the Swiss driver coming off worse. Further back Giedo van der Garde and Jules Bianchi came together too: the Dutchman was left stranded on the outside of turn one, and when Adrian Zaugg also tipped into a spin a few corners later there was no choice but to bring out the safety car. Further back Bird was lying in tenth after an incredible start from P18 on the grid, and when teammate Bianchi and Max Chilton came together one lap after the restart the Briton was up to an amazing P6: the team made a sharp call into the pits on lap 6 to see what they could do to help. Back on track Luiz Razia was pushing Grosjean hard for third, while Dani Clos and Valsecchi were squabbling over the positions behind: the pit call for Bird was the right one, with his rivals losing time fighting as Bird flew in clear air after his stop. Razia, Valsecchi and Clos stopped together on lap nine, with Bird slotting in ahead of the Spaniard, and a left rear tyre problem for Grosjean at his stop a lap later gave him another free position.

At the front of the field Perez sailed serenely on, with Turvey unable to challenge and stopping for fresh rubber, with the Mexican finally coming in on lap 12. Champion elect Pastor Maldonado was the only man left to stop, but a message from the stewards stated that he was going to have to make a drive through too, ruining any chance of a fight for points.

A clearly annoyed Maldonado left his stops until the last few laps, but Perez wasn’t waiting around: he reclaimed the lead on track on lap 18 and was gone, while behind him Turvey drove a strong race for second. Razia and Valsecchi’s races started to unravel under the harsh sun as they were unable to contain the pace of Bird and Clos: the pair had a fierce battle for the final podium position, with the Briton holding on by less than a second. Valsecchi managed to hold on for fifth place ahead of a fast charging Grosjean, with Razia just hanging on in front of tomorrow’s poleman Josef Kral, who secured a splendid P8 on his return to the series. 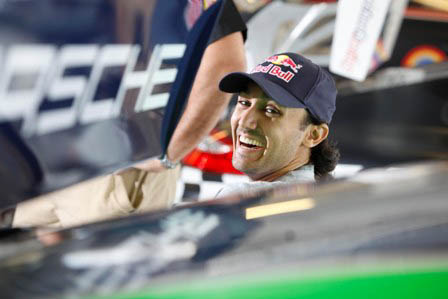 Dutch newcomer to the series, Oscar Slingerland, secured a top ten finish with the name of his team owner’s four-day old grand daughter, Karlijn, proudly displayed on the bonnet of his new Porsche GT3 Cup car inside a pink heart.