Red Bull take both Championships in a brilliant F1 season.

Webber possibly his one and only chance to become WDC.

Sebastian Vettel: Yeah, I am a bit speechless. I don’t know what you are supposed to say at this moment. It has been an incredible tough season for myself, for all of us, physically and mentally especially. We have always kept believing in us and our team and the car and I kept believing in myself. Today was a special day all around. This morning I got up and tried not to think about anything, tried to avoid contact with people too much, just try to do my own thing. I knew that the only thing I could do was try to win this race and do my best. As you say we have only led this championship once and when it mattered. I am speechless.

The car was phenomenal. The start was crucial. It was very tight with Lewis but then in the first stint I had a bit of graining, so that Lewis got a bit close but then the car stabilised. From then onwards it was a dream. It was good for all of us, it cooled us down, that Lewis got out behind Robert Kubica and got held up, so I could make a gap. To be honest I didn’t know anything until I crossed the chequered flag. The last 10 laps I was wondering as my race engineer every lap was trying to give some advice and trying to help me carry the car home. I was thinking why is this guy nervous, we must be in a bloody good position. Then crossing the line he came on the radio very silently and said ‘it is looking good, but we have to wait until the cars finish’. I was thinking ‘what does he mean’ and I hadn’t seen the screens. I just wanted to make sure, not get any distraction, just focus on myself. Then he came on the radio and screams at me that we have won the world championship. I don’t know, it is just… I have to say thanks to a lot of people.

I will surely forget a lot of those. But to start with the team, all the guys here at the race track, all my mechanics, all the mechanics in the team, not only mine everyone. Engineers. We have an extreme, strong – sorry I make this long – amount of people working together in harmony. Back in Milton Keynes the guys are pushing like hell and I think they enjoy this moment as much as last week. Back in Austria all the people that have supported me since the beginning. It has been an incredible journey with Red Bull and after this season with the ups and downs to come here now and lead the championship after the last race is unbelievable. I can only say thanks and also thanks to all the people back in karting. Some of them are here, some of them are in Kerpen supporting me but also back in my home town, Heppenheim, so I just got to say thank you very much.

Christian Horner: “It’s unbelievable, It’s been a very emotional week for this team. I’m just so proud of the team. It’s just an amazing feeling to be double world champions, it’s the icing on the cake with the drivers’ title. This team is the best team in the world.

Sebastian, it’s the first time he’s led the world championship and he’s done it at the last race of the year. Unbelievable. A great job, he drove a perfect race when the pressure was on.

He has had ups and downs, he’s had bad luck, he’s had some mechanical problems, some engine failures but he never lost his focus and belief – and now he is a champion. A great season.

“He’s quite a remarkable character, he was the coolest of all of us. His rise to this point has been huge. He’s a product of the Red Bull Junior Team and today he’s delivered the biggest trophy in motorsport.”

We continued to back both drivers equally and it was the right thing to do.

At the end of the day, the best guy has won. There’s nothing to take away from Mark. He can also be very, very proud of what he’s achieved this year. He has driven well too, the fact that both drivers took it to the last race was just fantastic.” 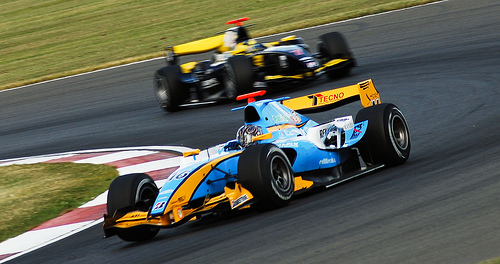 Davide Valsecchi jumped his rivals at the start to take the lead after the first corner of this afternoon’s sprint race in Abu Dhabi, leading all the way to the flag for his first win of the season by absorbing race long pressure from Luiz Razia and Romain Grosjean. The Italian’s victory was set up when the lights went out:

poleman Josef Kral was slightly delayed off the line, handing front row starter Razia a clear line to turn one, but the Brazilian went too deep. Valsecchi and Grosjean were side by side out of the corner and into the lead, and when Razia chopped back on track the Frenchman had nowhere to go and dropped back to third to avoid being squeezed on either side.

Behind the top three Sam Bird had made his customary sharp getaway but was quickly jumped by Dani Clos, with a fierce battle for P4 commencing between the pair ahead of Kral, Sergio Perez and Oliver Turvey: the Mexican was soon by the poleman and looking for more, making it a three way fight for fourth place.

The battle was extinguished almost as quickly as it began: two laps later Perez dived inside at a gap which wasn’t really there, colliding with Bird and putting the pair out of the race almost instantly: with teammate Giedo van der Garde picking up three drive through penalties the Addax pitwall realised that their chances of reclaiming up the team’s championship were over for the year.

Back on track there were plenty of scraps but little in the way of overtaking: Razia pushed hard as he tried to save his team’s championship (and help his own), and applied constant pressure to Valsecchi as he looked to bring home the win iSport were denied yesterday. And at the flag he held on for victory by less than a second from Razia, with Grosjean holding off a late charge from Clos, Kral claiming a few more points for fifth, and Turvey just hanging on to the final point against a spirited challenge from Brendon Hartley.

With the final race over the championship standings are set: Pastor Maldonado is the 2010 GP2 champion, Sergio Perez is the vice-champion, with Jules Bianchi hanging on for third place. In the team’s standings Razia’s podium today guaranteed Rapax their first title, pushing their way past Barwa Addax Team (who held the lead with Perez’s victory yesterday), and ART Grand Prix joining them for third place. 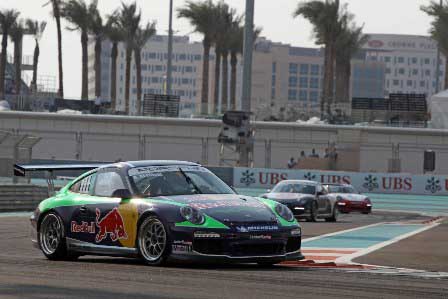 Reversing the top two finishing positions from the previous day, the defending champion cruised to victory by seven seconds from Bahrain’s first round winner, Sheikh Salman Bin Rashid Al Khalifa, to go level with him at the top of the 2010-11 championship standings.

After securing his first podium place in the one-make series 24 hours earlier, Abu Dhabi’s Khaled Al Qubaisi took third place again to underline the validity of his challenge this season after a summer gaining experience in the Porsche Mobil 1 Supercup in Europe.

The starting grid had been decided by the drivers’ second fastest times during qualifying on Saturday. Starting in pole position, Prince Abdulaziz got away from the grid smoothly, and gradually built up a comfortable cushion from Sheikh Salman who was never able to get close enough to put him under pressure, as he had done the previous day.

The two drivers now share the championship lead as they look ahead to Rounds 3 and 4 on Speed weekend at Bahrain International Circuit on December 2-3.