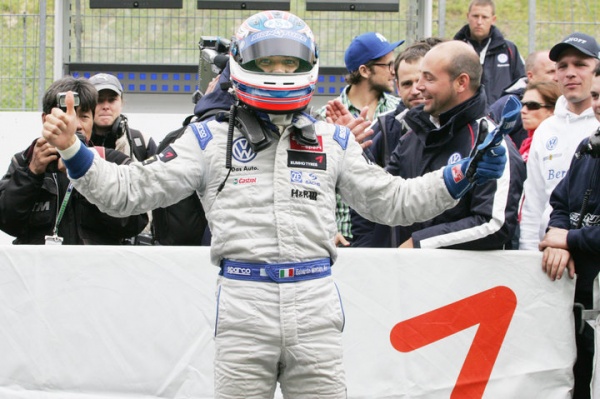 Mortara remains the man to beat in the Macau Formula 3 Grand Prix.

In the qualification race at the 6.12 kilometres long Guia circuit, the Italian drove an undisputed victory home. Laurens Vanthoor (Signature) and Daniel Abt (Signature) followed him across the finish line. Valtteri Bottas (Prema Powerteam) in fourth and Marco Wittmann (Signature) in fifth place made sure that four of the first four drivers are coming from the ranks of the Formula 3 Euro Series.

Mortara only had to battle for his position at the start of the opening lap, from which he returned with a margin of over two seconds. After that, the only thing the defending Macau Grand Prix winner had to do was avoid making mistakes and to maintain his advantage. Second place for Laurens Vanthoor wasn’t in danger for a long time either, once he had overtaken Daniel Abt on lap three. Abt, however, was involved in a hot battle with Bottas, Wittmann and Roberto Merhi (Prema Powerteam). The Macau rookie, who has already signed a contract with Signature to race in the Formula 3 Euro Series next season, showed a strong performance and prevailed in an impressive way.

Edoardo Mortara (Signature): “My start was not so good, but I could claim back the lead on the first lap. When my margin was big enough, I backed off a little bit. This victory is nice, but the really important thing is tomorrow, because that is when the main race of the weekend is on.”

Laurens Vanthoor (Signature): “I was stuck between other drivers right after the start and lost positions as a result, but I could get it back in the first three laps. When my margin over the drivers behind me was big enough, I safely drove second place home. Edoardo is the favourite for tomorrow’s race, but I will try everything to beat him. Victory at Macau would be a dream.”

Valtteri Bottas (Prema Powerteam): “I had some bad luck as I hardly had any slipstream on the straights. But from fourth place on the grid, nothing is lost yet. I am still a contender for victory at Macau in 2010. 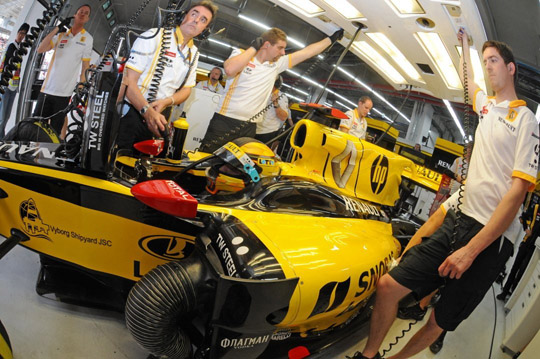 The Renault F1 Team completed a final day of testing in Abu Dhabi as Robert Kubica remained behind the wheel of the R30 to continue evaluating the new Pirelli tyres.

Robert Kubica: “It has been quite a productive day and it’s good to complete so many laps on the new tyres. Like yesterday we ran with both compounds and collected a lot of data, which will be useful for us and for Pirelli as well. Overall it has been a positive couple of days and now we have to try and extract as many conclusions as we can from the data. My initial feeling is good and it seemed that the tyres got better as the track conditions improved throughout the day.”

“We’ve had a second useful day on the Pirelli tyres and managed to complete medium length runs on both the soft and medium compounds without any significant issues. This allowed us to start understanding the tyre characteristics and assess the degradation rates. We struggled with some understeer today, which we never totally got rid of, so we still need to try and understand that. Over the next couple months we will continue building our relationship with Pirelli by exchanging data so that we’re ready for winter testing to resume next February.”