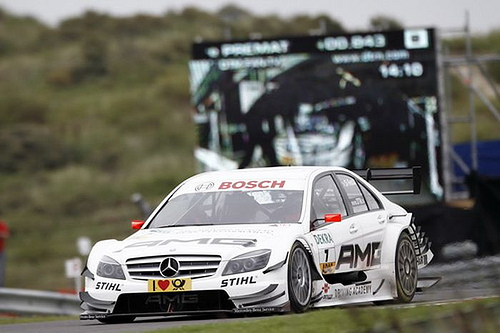 Shanghai. Fortune in the Far East. Scottish Mercedes-Benz driver Paul Di Resta ends up second in the DTM finale in the metropolis of Shanghai, which makes him the 2010 DTM champion. Bruno Spengler from Canada (Mercedes-Benz), who was the points’ leader prior to the race, failed to make up positions from 17th place on the grid following an accident in qualifying, which cost him his three points’ margin. In the final standings, 24-year old Di Resta has 71 points. “This smile won’t be off my face for a long time. Fortunately, my flight is only booked for Monday. I would have liked for more family members to be here to celebrate with me. But now, I will celebrate with the team. Today, it was more about the title rather than victory in the race. That has worked out”, Di Resta described his feelings. In total, the Scot scored three race wins and three second places this season. Di Resta only failed to score points on two occasions.

British driver Gary Paffett won the race in China, which allowed him to become runner-up in the final drivers’ standings to complete the 1-2-3 for Mercedes-Benz in the championship. “Now, I have won for the second time in Shanghai after 2004. I am enjoying this type of circuits. My goal was to win this race. The rest was out of my hands”, said race winner Paffett.

The German DTM champion of the years 2008 and 2009, Timo Scheider, became the best-placed driver of an Audi A4 DTM by finishing third in the DTM finale. In the battle for the title, Scheider was also the best driver with four rings on the bonnet of his car in fourth place. “Admittedly, I had problems at the beginning of the season, but the team kept its faith in me. In the second half of the season, I was again able to battle for pole positions and race wins. Third place in the final round is a good way to end the year”, said Scheider, looking back on the 2010 season.

Behind German Martin Tomczyk (Audi) in fourth place, Spaniard Miguel Molina became the best-placed driver with a 2008-spec car with his Audi A4 DTM in fifth. DTM rookie David Coulthard from Scotland achieved his maiden points’ finish. The Mercedes-Benz driver ended up eighth and scored one point. 19,000 spectators came to watch the DTM season finale in the Far East. After a collision with seven minutes remaining, the race was stopped and wasn’t restarted.

The first DTM race of the 2011 season will take place at the Hockenheimring Baden-Württemberg on May 1st next year.

Head of motorsport Mercedes-Benz Norbert Haug: “Paul Di Resta is a worthy champion. Yesterday, that was by no means certain. After all, making a mistake here is easy. It was a thrilling race. Gary’s second victory here in Shanghai speaks for him. Everybody involved has worked together very well. We have had quite a few good seasons before, but this year with the first three places was something quite special. The fact that the first three drivers were separated by only five points shows how close competition in this series is.”

Head of motorsport Audi Dr. Wolfgang Ullrich: “I am proud of being a member of such a great team that is working on a common goal. We haven’t been as strong as in the years before. Even the smallest errors sometimes mean that you have to end your championship dreams. When you lose, it doesn’t mean that you are weak, it just means that others were a little bit stronger. We have to catch up and we have learned our lesson, from which we will benefit next year.”

Formula 1 superstars Sebastian Vettel and Michael Schumacher both hailed Team Germany’s incredible fourth successive victory in the ROC Nations Cup after a rollercoaster evening in front of their home crowd.

In a repeat of the last two ROC Nations Cup finals, Team Germany lined up against Team GB, represented in the ESPRIT arena by Andy Priaulx and Jason Plato.

The two teams were extremely closely matched and needed a sudden-death shoot-out to decide the result, with Schumacher beating Priaulx by a fraction.

After such an exciting ROC Nations Cup, the drivers gave their reaction to events. Here’s what some of them had to say:

Michael Schumacher (Team Germany): “It is special because we had won this three times in a row which was great anyway. So to do it a fourth time here in Germany, considering we were almost knocked out in the group stages, is fantastic – we are more than happy. The crowd were very supportive tonight; they were cheering us all the way and with Sebastian having just won the world championship it was even more emotional and fun out there tonight. After the group stages we definitely needed to wake up – it felt like we were asleep. But when we were in the final, against the British guys, I thought we had a good chance.”

Sebastian Vettel (Team Germany): “The moment I went out on to the track everyone stood up and went crazy. It was a really cool night for all the fans, as well as for Michael and myself to get so much support. It was extremely close in the first round and we thought we might get knocked out. But I was lucky I had Michael on my team. It was a fun experience and to win at home, the first time in many years that The Race of Champions has been held in Germany, is very special.”

Andy Priaulx (Team GB): “To race against Michael Schumacher is always a privilege and we were beaten by two good guys tonight. I had some good races today, particularly the one against Sebastian Vettel. I beat the current Formula 1 world champion which is not bad for an old touring car driver! That is three years in a row I have lost out in the final after losing to Germany at Wembley and then Beijing. I really wanted to get it today but it is great to be here and we did well.”

Jason Plato (Team GB): “For lots of reasons we really wanted to win that one but in the end we weren’t quick enough. I let the side down a bit as I wasn’t on the top of my game when Andy certainly was. We gave it a good shot – close but no cigar.”

Bertrand Baguette (Team Benelux): “I had a lot of fun and for me racing against Michael Schumacher, Sébastien Loeb and Alain Prost is a dream. It went quite well but unfortunately we didn’t make it to the final. I have to say I am happy for the people who voted for me to be here as part of Team Benelux. I am really proud to be here and very happy I could be here thanks to them.”

Heikki Kovalainen (Team Nordic): “That’s the way it is sometimes. I managed to do well in my races and win all three but we had tough opponents. It is nothing to be ashamed of; just the way it is and next year we have to come back a bit stronger.”

Tom Kristensen (Team Nordic): “It is frustrating to be eliminated in the first round. Heikki did a fantastic job to win all his races and it would have been nice to progress but there’s always next time. It makes me even more determined to do better tomorrow. You don’t need to use the cars on Monday so everyone will push even harder!”

Carl Edwards (Team USA): “I had fun driving and I am excited for tomorrow when I need to redeem myself. I don’t know what went wrong; I was just slower than I was yesterday. I was much faster yesterday, especially in the KTM, but there is no excuse, it was just me. I will run better tomorrow, I’m sure.”

Travis Pastrana (Team USA): “It felt really good to beat Sebastian Vettel in the first round and it was just really cool to race him because I have so much respect for him. It’s unfortunate we couldn’t go through but it was awesome having Carl Edwards over here and driving alongside me for Team USA. It was a bit tough for us out there but now I’m looking forward to tomorrow.”

Mick Doohan (Team All Stars): “That was an absolutely fantastic experience, really enjoyable. I was surprised to beat Carl Edwards because he spends all his year driving cars so I enjoyed that. This is a lot of fun for me and I just enjoy driving these cars against these drivers. I have a blast and if I can come close to these guys I am really happy.”

Alvaro Parente (Team Portugal): “I got the puncture during the run so I hit the wall because of that. Already on the straight the car didn’t feel quite right so maybe I could have stopped there but I am a racing driver so I tried to push on. The puncture cost us the chance to go through but that was just down to bad luck and I’ll try to get a better result tomorrow.”

Tonight’s official attendance was 36,189 and tickets are still available to see the main event tomorrow, when the stars of world motorsport go head to head for individual glory in The Race of Champions.