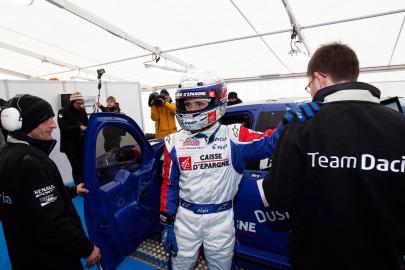 After earning Dacia’s maiden win in the Trophée Andros at Val Thorens in 2009, Alain
Prost finished on top once again at the same venue to give the make its first victory of
the 2010/2011 campaign and also take an early lead in the championship’s provisional
standings. The four-time F1 world champion and two-time Trophée Andros winner
champ was in outstanding form from the qualifying heats to Sunday’s finale at the wheel
of his Dacia Duster Glace.

Given the potential revealed by the car during the first day of competitive action at Val Thorens
which saw Alain Prost claim third place, the team clearly had hopes of kicking off the new
season with a win. The morning’s warm-up session gave the Frenchman a chance to fine-tune
the settings of his Dacia Duster Glace and, more especially, its suspension set-up.
The car went on to dominate the first qualifying heat as Prost, who was the last driver out, made
the most of its potential to post a string of quick laps with clockwork-like consistency (46.810s,
46.610s, 46.681s and 47.071s). That put the Dacia Duster at the top of the time-sheets with an
aggregate time of 3m 7.172s.

“I didn’t feel completely relaxed,” admitted Alain Prost. “The handling of my Dacia Duster was
perfect, though, thanks to the adjustments we made. I can now go into the second qualifying
heat in a totally different frame of mind compared with yesterday evening when I couldn’t afford
to make a mistake.”

The second qualifying heat passed off just as well, with Alain Prost producing another quick run
as he modified his cornering lines as a function of the evolving track conditions. The four-time
world champion was second overall in the second heat, a result which particularly pleased him
inasmuch as nobody managed to repeat their times of the morning. “I was first in the first heat,
second in the second and I’ve got the best total time for the two, so that’s a positive. I made a
point of looking after my tyres in the second heat to ensure they stay competitive for the final…”
Although 80 percent of the points up for grabs had already been awarded, the finale was still to
come. Prost started from pole and successfully defended his position for eight laps to take an
assertive win, the first of the 2010/2011 series for Dacia and the 31st Trophée Andros success
of the French driver’s career.

“It was important to win one of the weekend’s two races,” observed Prost. “Like last year, victory
came in the second one. The level of competition in this winter’s Trophée Andros is amazing. I
have never known it to be so competitive. Given the weight handicap system and the extremely
small gaps, it won’t be easy to take both wins over a single weekend. The Dacia Duster handles
really nicely and I think we will be competitive at every round, even when the conditions are as
bad as they were here at Val Thorens. In points terms, it’s been a good weekend. To win this
year’s Trophée Andros, we will above all need to be consistent because there are maybe 10
drivers capable of winning and some of them will perhaps try to target certain races in particular.
So we can’t afford to make any mistakes. It will be important to adapt our strategy as a function
of our results and, hopefully, we will benefit from a little good luck from time to time, too.”
Team Dacia will now head for the Principality of Andorra for next weekend’s encounter at Pas
de la Case, the second of the season.