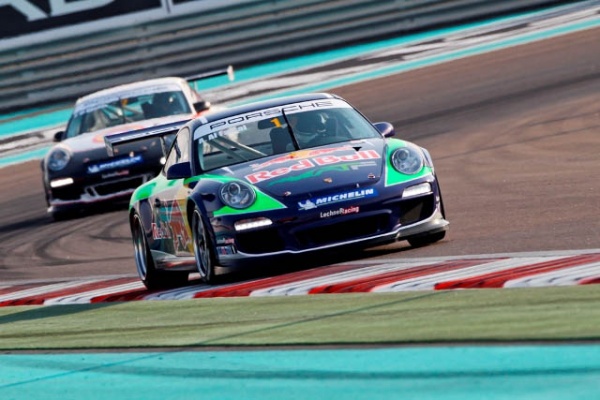 Dubai. Defending champion Prince Abdulaziz Al Faisal wants to turn back the clock 12 months when the Porsche GT3 Cup Challenge Middle East returns to Saudi Arabia later this month as he looks to recapture his title-winning form on home ground.

After four rounds of the inaugural 2009-10 season, Abdulaziz already had a commanding 14-point lead in the championship and looked in a class of his own.

Despite this quite dramatic turnaround, Abdulaziz remains unflustered and has set his sights on a double race victory when Reem International Circuit, outside Riyadh, hosts Rounds 5 and 6 of the series on January 19-20.

“The target is definitely to win both races and there’s a realistic chance of this,” he said. “I want to retain my title, and winning both rounds at Reem would put me in a strong position and I’d then look to kick on from there.

“Having said that, the competition is much tougher this season. Salman will definitely come to Reem with a lot of confidence, and so he should. The fact that he’s won two rounds this season and is the current leader speaks for itself.

Abdulaziz added: “ Fahad won a race at Reem last year and will be extra confident this time. Both he and Salman are always right up there in qualifying, and if they get pole position they will be hard to beat as overtaking is so difficult at Reem.

“Khaled also has improved greatly since last year, and Bandar is very consistent. He finished third overall last season and if he can get his confidence up and do well in qualifying he could also be in the mix, especially as it‘s his home circuit.“

The Porsche GT3 Cup Challenge Middle East created history at the demanding Reem track last January when it became the first FIA-sanctioned international circuit racing event to be staged in the Kingdom.

The event attracted an estimated 3,000 spectators, and young Saudis are expected to gather in large numbers again to cheer on Abdulaziz, who nevertheless does not feel under any extra pressure to win.

“I look at it from a different perspective,“ he says. “I don‘t feel there is a huge amount of pressure despite the successes of last year. I feel more comfortable and stronger. I know I’ll do my best, and I hope that will be good enough.

“ At the start of last season everything went smoothly and it’s not been quite the same this time. At Yas Marina for Round One I had the wrong set up coming into the race. Then in the first race in Bahrain I lost the second gear. But at the same time I’ve grabbed pole position each time in qualifying so I’m still confident and driving well.“