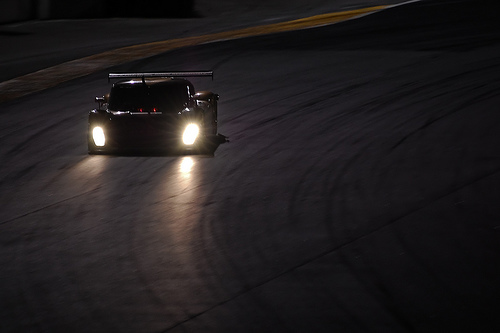 Eagerly anticipated by drivers, auto manufacturers and race fans everywhere, the Rolex 24 At Daytona is the first major race of the international motor sport season. Every January, the Daytona International Speedway (Daytona Beach, Florida, USA) comes to life in celebration of this incredible endurance race, recognized by leading drivers as one of the most difficult in the world to win. On January 29 – 30, 2011, the Rolex 24 At Daytona will be the first race run on the newly repaved Daytona International Speedway.

Building anticipation for the 50th Anniversary 2012

2012 will mark the 50th Anniversary of the Rolex 24 At Daytona. Leading up to this unique anniversary, we present a once-a-month look back through the history, people and events that have made this famous race what it is today. This month we finish in present day, covering 2009 and 2010, in our rapid approach to the start of the 2011 Rolex 24 At Daytona.

2009: David Donohue (USA) had a rendezvous with destiny in the 2009 edition of the Rolex 24 At Daytona. The opening two hours and 45 minutes of the race were run under green flag conditions, and the race was ultra-competitive, with the top four running nose-to-tail part of the way in the final hour. Donohue drove the race of his life, 40 years after his father – Mark Donohue – gave Roger Penske a victory in this endurance classic. Young Donohue passed Juan Pablo Montoya (COL) with 39 minutes left and went on to win by .167 seconds, the closest finish in the history of 24-hour racing. Donohue joined Darren Law (CAN), Buddy Rice (USA) and Antonio Garcia (ESP) in giving Brumos Racing its first GRAND-AM Rolex Series victory since 2003, denying TELMEX/Target Chip Ganassi Racing with Felix Sabates its fourth consecutive victory at the Rolex 24 At Daytona. The Donohues became the third father-son combination to win the event overall (in addition to Al Unser and Al Unser Jr., and John Paul and John Paul Jr.).

The record-breaking event saw the closest margin of victory, most finishers on the lead lap and most cautions, 25 for 117 laps. The top-four finishers covered 735 laps – the most ever in the Daytona Prototype era. In addition, there were 53 lead changes among 22 drivers and nine cars, the second-highest total in event history. In the past, Brumos Porsche fielded winning entries in the Rolex 24 in 1973, 1975 (as Peter Gregg Racing), 1976 and 1978, and also sponsored the winning Joest Porsche in 1991. The team also won its class in 1962, 1968 and 1972. Porsche’s last overall victory in the Rolex 24 was in 2003, when TRG put a GT entry in Victory Lane.

Around midnight the McDonald’s Ford/Dallara had transmission problems and was in the garage for over two hours before rejoining the fray, while at that hour the top-four DPs were running within five seconds of one other. At dawn Papis was leading. The Krohn Racing Ford/Lola was running in the top five but had to pit to replace brake pads and perform repairs. On lap 497, the front cowling of the Crown Royal XR Ford/Riley flew off the car causing a full course yellow.

By 8:30 a.m. AJ Allmendinger was leading in the Michael Shank Racing Ford /Riley. Mike Rockenfeller (GER) was second with Action Express Racing and three-time champion Scott Pruett (USA) was running third in the Telmex BMW/Riley for Chip Ganassi Racing with Felix Sabates. With just half an hour left in the race, it all came down to a contest between Action Express Racing, driven by Joao Barbosa, and the #01 Chip Ganassi Racing with Felix Sabates, driven by Pruett. With 15 minutes to go Pruett was only 52.640 seconds behind. The possibility of a yellow flag incident, which would allow the field to close up behind the pace car, added to the tension, but in the end, it was Barbosa who crossed the finish line first. The team represented a multi-national effort with Barbosa of Portugal, American Terry Borcheller, Scotsman Ryan Dalziel and Rockenfeller from Germany. The race featured a record 53 lead changes among 29 drivers. All but two of the Daytona Prototypes led in the event, and all but two of them experienced problems that dropped them out of contention.

This result marked Barbosa’s second consecutive victory in Rolex Series Daytona Prototype competition; he and Hurley Haywood won the 2009 season finale at Homestead-Miami Speedway for Brumos Porsche. After the 2009 season, Brumos cut back to a one-car effort, with Daytona Beach businessman Bob Johnson forming Action Express Racing to work closely with Brumos to continue the two-car effort. Barbosa led 129 laps, while the four Action Express Racing drivers combined led 316 of the 755 laps. The result represented a second overall victory for Borcheller in the Rolex 24, as he won the event with Bell Motorsports in 2004 in addition to having won his class in 2002. The win also marked the second consecutive and 22nd overall victory for Porsche in the event.

2011 PREVIEW: In early December 2010 the historic repaving project at Daytona International Speedway was completed, setting the stage for a new chapter in motorsports history that will commence with Andy Green, the World’s Fastest Man, waving the chequered flag on January 29, to start the 2011 Rolex 24 at Daytona.

Caracingnews.com will be on-site for all the action, bringing the excitement of racing right to your inbox. Until then, be sure to pick up a copy of J.J. O’Malley’s Daytona 24 Hours: The Definitive History of America’s Great Endurance Race, a “must read” for any fan and the ultimate source for Rolex 24 At Daytona historical information.

It was in 1959 that Rolex first began its long association with the Daytona International Speedway. In 1963, Rolex launched their new “Cosmograph” line, but it was not until 1965 that the name “Daytona” would be added to the dial as a tribute to the great Florida race. Designed for lovers of speed, the Rolex Cosmograph Daytona allows its wearer to clock elapsed times and calculate average speeds.

In 1992 Rolex became the Title Sponsor of the 24-hour race at Daytona, which had since become one of the world’s most prestigious endurance competitions along with the 24 Hours of Le Mans.

About the Rolex 24 Hours at Daytona

The Rolex 24 At Daytona, America’s most prestigious sports car race is one of only two 24-hour sports car events in the world. 2012 will mark the 50th Anniversary of the Rolex 24 At Daytona. The famous twice-around-the-clock challenge always kicks off the international motorsports calendar, as well as the GRAND-AM Rolex Sports Car Series, and features a star-studded line-up of drivers from around the world battling with Daytona’s demanding 3.56-mile high banked road course.