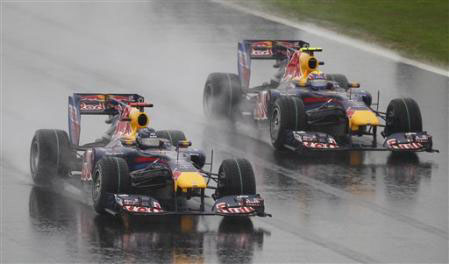 Back in November it looked very likely that the Volkswagen group were going to enter F1 with the Williams team. This new found interest in Formula One revolved around rumours that the FIA was set to announce new environmentally friendly engine regulations in time for the 2013 season. Since then the FIA has confirmed the new regulations and Volkswagen appears to have changed allegiance.

The major change for to the technical regulations for the 2013 season is the engine regulations, with plans to reduce engine size from the current 2.4 litre V8 engines to 1.6 litre four cylinder turbo engines. These new engines will produce 650bhp which is 100bhp less than the current V8 engines. However, this power deficiency will be recovered using an increased capacity KERS device.

The main reason behind these changes is to make the sport more relevant to the road car industry which is becoming increasingly focused on being environmentally friendly on the back of rising fuel prices and the fact that it is claimed by Moneysupermarket.com that the environmental impact of a vehicle is a consideration of car insurance firms.

Formula One’s lack of relevance to the road car industry was a big part of the reason behind Honda and BMW’s withdrawal from the sport in 2008 and 2009 respectively as both manufacturers felt that the sport had become too preoccupied with aerodynamic refinement rather than improving fuel efficiency. It is felt that what is learned from F1 with the regulations in terms of improving fuel efficiency and power output from small capacity engines will therefore be far more likely to be transferable to road car engines.

Porsche chairman Matthias Mueller announced at the Paris Motor Show in October 2010 that it made no sense for his company to compete against its sister firm Audi in the sports car arena. He therefore publicly advised parent company Volkswagen to place one of the brands in Formula One instead.

Williams were the first to take advantage of this declared interest and it is rumoured that Williams CEO Adam Parr missed the season ending Abu Dhabi grand prix in order to meet VW board members in Qatar in an attempt to persuade them to enter with his team. However, Williams hasn’t won a race in over six years and it appears that Volkswagen felt that the team didn’t meet its required criteria of enabling them to enter a new category and begin winning races straight away. A number of negative comments were uttered by Volkswagen board members about the possibility of entering F1 and it therefore appeared that Volkswagen’s plans to enter F1 would once again be placed on a back burner.

Red Bull had a hugely successful 2010 season, taking both championships with Sebastian Vettel at the wheel. However, the team have been critical of engine partner Renault’s performance over the past two years with claims that the engine is both down on power and unreliable. It is therefore believed that Red Bull opened negotiations with Volkswagen once it became clear that the company’s negotiations with Williams had fallen through.

Red Bull were capable of giving Volkswagen what it wants in that they will be able to enter the sport and have a chance of winning straight away given that Red Bull are the reigning champions; and additionally Volkswagen would have access to the fast young German Sebastian Vettel. Team Boss Christian Horner recently refused to rule out the Volkswagen deal, simply stating that anything was possible and that the team had exciting plans for the future. It should be remembered that Red Bull already has an existing relationship with Volkswagen on the back of joint campaigns in junior motor racing categories F3 and DTM.

One thing which could disrupt the whole deal is Sebastian Vettel’s contract. The 2010 World Champion is likely to be a key factor in the attractiveness of Red Bull to the German car manufacturer and if he is no longer part of the deal it could throw the possibility of a deal into doubt. Mercedes GP is believed to be interested in securing Vettel for its team in 2013 as replacement for Michael Schumacher at the end of his three year contract, while Ferrari has also stated an interested in acquiring the services of the young German. Sebastian Vettel could therefore hold the answer as to whether of not Volkswagen will finally enter F1 in 2013.