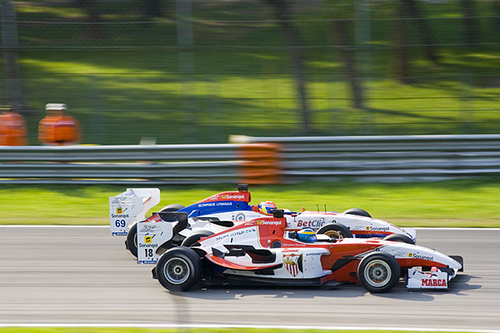 Having spent a year  with Lotus Junior Racing, the French driver, 22, Spanish vice-champion of Formula 3 in 2008, is ready to step into the fray and fight for the title.

“I improved all through last year and I learnt a lot. I feel pretty confident now that I can go for the title this year,” says Nelson Panciatici.

“To start with, I’m going to have to win some races. To be a KMP Racing driver gives me that opportunity and I’m going to work hard to maximise my chance of success. I got to appreciate the quality of the team’s work during the winter trials and I’ve already picked up a few “tricks” with regards to the car’s performance.  Even though you never know how a new season is going to pan out, I feel quietly confident.

Not only do I have technical staff who know the discipline, I also have Bruno to give me sound advice. It is a real bonus to have an ex-pilot at the head of a team because they know what we need to go fast. I’m going to make the most of this opportunity and I want to thank the team for putting their trust in me.”

Bruno Besson, Team Manager of the KMP Racing team, says : “I followed Nelson’s progress closely all of last year and he fits our ethos perfectly. We got to know each other better during the winter trials, he’s a “winner” and I like that quality. Nelson has the skill to finish in the top three of the Drivers’ Championship. However, it is a very competitive championship and one can lose ten places for a small one or two tenths of a second in the qualifiers. Hard work and success will be key to take the title.”

Nelson Panciatici has applied himself really hard physically and mentally to prepare for what could be a landmark season. His main objective will be to win the title, how he gels with the team will be decisive to get to pole position, without which one cannot hope to win!