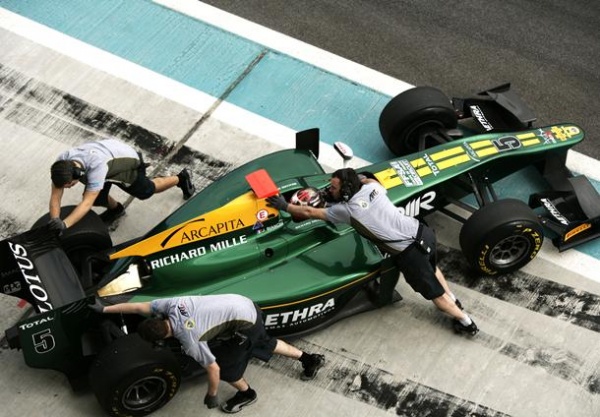 Today, Robert’s general condition has once again improved. According to the doctors, the levels of inflammation are in the norm considering his medical condition, and the recovery of his forearm remains encouraging.

Yesterday, Robert was able to talk to his doctors and relatives. His medication makes him sleep quite a lot, but he is responding to all external stimulation. He has reacted well to the news about his condition and is ready to fight for his comeback.

On Thursday, Robert should undergo some more surgery in order to stabilise the fractures to his right shoulder and right foot. Three or four days later, another operation will allow his elbow fracture to be stabilised as well.

Robert will remain at the Santa Corona Hospital for two to three weeks. A decision will then be taken about where he should go in order to continue his rehabilitation

The final pre-season test day took place today at Yas Marina Circuit on the 4.730 kms layout. Very early in the morning session Lotus ART’s Esteban Gutierrez set the pace in a 1:36.684 ahead of Carlin’s Max Chilton, but his laptime was soon bettered by the GP3 Series reigning Champion’s teammate Jules Bianchi who clocked in a laptime of 1:36.300. As the clock ticked down, Bianchi went quicker, so much as to become the only man to go under the 1m36s barrier, eight hundredths of a second ahead of Davide Valsecchi at Team AirAsia while Sam Bird and Marcus Ericsson rounded out the top four.

The afternoon session was a bit slower as teams mainly focused again on completing race simulations. Racing Engineering’s Dani Clos rapidly took control of the timesheet in a 1:36,619, with Johnny Cecotto at Super Nova in tow. With drivers upping their total of numbers of laps, the order remained unchanged for the first two hours, and the session was briefly red flagged twice. Entering into the final hour, Team AirAsia’s Luiz Razia edged Clos off the top. The Brazilian’s teammate Davide Valsecchi soon after moved up to P2 before snatching the top spot from Razia in a 1:36.211, and going even quicker the following lap with a 1:36.159. Marcus Ericsson moved up to P3 before another red flag occurred. A final interruption happened with 10 minutes left into the session when Valsecchi and Romain Grosjean collided. At the re-start, iSport’s Sam Bird slipped into P3 in the dying minutes of the day.

This concluded the two-day test session during which 13060 kms and 2761 laps were completed. The fourth season of the GP2 Asia Series will open this Thursday in Abu Dhabi.