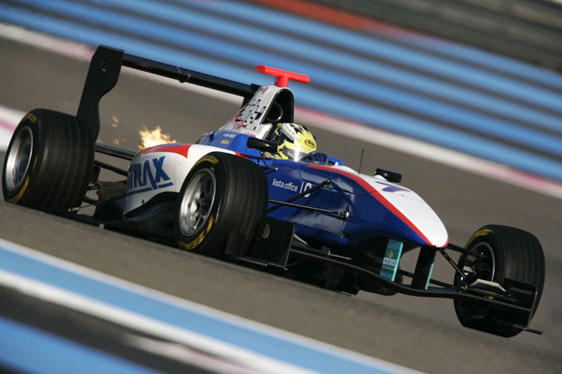 Jenzer Motorsport’s Nico Müller was the fastest man on track for the final day of testing at Circuit Paul Ricard today, after setting the quickest time in this morning’s session.

The GP3 Series was back on track today for the second and final day of pre-season testing at Circuit Paul Ricard. After yesterday’s downpour, teams were greeted with much improved conditions in Le Castellet, albeit with low temperatures and a wet track. Status Grand Prix’s Antonio Felix Da Costa was first to complete a benchmark lap with the rest of the field in hot pursuit. Together with Atech CRS GP’s newcomer Nick Yelloly, Da Costa mastered the damp conditions, and the pair topped the time sheet for nearly all the opening part of the session.

Mid-way through the morning the sun was shining and the track was finally dry enough for the drivers to swap their wet weather tyres for slicks. Yesterday’s quickest man Alexander Sims was the first to make a move planting his #4 Status GP car in the number one spot. Except for an initial flurry of track activity, the rest of the session was slow until a late rush of fast laps on new rubber. Nico Müller took top honours for Jenzer Motorsport, with RSC Mücke Motorsport’s Nigel Melker and Michael Christensen filling the next two spots. MW Arden was the only team to have all three drivers in the top ten.

The rain held off for the afternoon session and the teams were treated to warmer temperatures and a dry track. Slowly but surely the young drivers made their way out of the pits to do installation laps, and one again it was Sims who found the top spot. The Status driver was closely followed by rookies Valtteri Bottas, Maxim Zimin, James Calado and sophomore Pedro Nunes. The positions remained relatively unchanged during what was a quiet afternoon until once again drivers made a last minute dash to the track with new Pirelli rubber. With all other drivers struggling to match Sims’s time, Calado produced an outstanding last lap of the day pushing his fellow Brit off the top spot. However, the Lotus ART driver was found to have cut the chicane on his quickest and final lap, therefore, his two fastest laps of the afternoon were deleted. This restored Sims to the top spot, with MW Arden’s rookie Mitch Evans ending the session in second ahead of Müller whose best morning laptime remained unbeaten.

GP3 Series will be back on track at Silverstone Circuit in just over three weeks for the second of three 2011 pre-season tests.