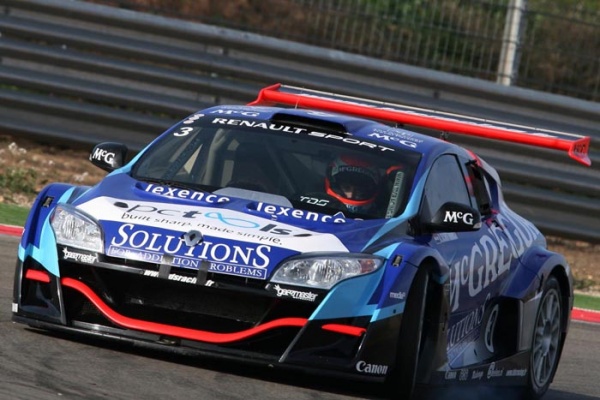 Bas Schothorst straight up to pace

By setting the fastest time in the first collective tests of the season, Bas Schothorst, who made the switch to TDS Racing over the winter, has proved that he is going to be a force to be reckoned with in Eurocup Mégane Trophy. The Dutchman will, however, have to hold off challenges from the Oregon Team drivers Stefano Comini and Niccolo Nalio and possibly Nick Catsburg (Boutsen Energy Racing), who may yet be back to defend his title.

After Eurocup Formula Renault 2.0 and the Formula Renault 3.5 Series, it was the turn of the Eurocup Mégane Trophy field to put in two days of collective testing at the Motorland Aragón circuit. It was the first taste of action for the twenty Mégane Trophy cars, complete with the new developments for the 2011 season, including a new wider rear wing, a new front brake cooling system and the fitting of front and rear wheel arches.

The Eurocup Mégane Trophy regulars were quick to make their presence felt. Stefano Comini (Oregon Team), who looks determined to be in the title hunt this season, put in the best performance in each of the two sessions. The Swiss driver set the best time of the day at the end of the morning session, with a lap in 2’03’’178. He completed this first day of collective tests out front, ahead of Niccolo Nalio and the TDS Racing drivers, Bas Schothorst and David Dermont. Back in fifth, Andrea Cecchellero (Brixia Horse Power), at just 20 years of age, and already runner-up in Formula Renault 2.0 Italia last season, looked to be acclimatizing to the Mégane Trophy very quickly indeed.

On Friday, the winner of the 2010 Eurocup Mégane Trophy, Nick Catsburg, made his return to action. The Dutchman joined forces with Boutsen Energy Racing for this day of testing. Michele Faccin (Oregon Team) was putting in his first ever track time in a Eurocup Mégane Trophy, thus adding his name to the already lengthy list of single-seater drivers who have opted for a drive in the high-performance touring car developed by Renault Sport Technologies.

Everyone upped the pace for this second day of collective testing. Bas Schothorst set the fastest time very early on, with a lap in 2’02’’551. This put him fastest at the end of the morning session ahead of Stefano Comini, who was working on a race simulation, as was Niccolo Nalio, who was third fastest. In the afternoon, it was Stefano Comini who put in the fastest time, though he was unable to equal Bas Schothorst’s performance from the morning session. The TDS Racing driver has thus made his ambitions very clear before the field heads to Barcelona for the next session of Eurocup Mégane Trophy collective testing to be held on March 24 and 25, 2011.

Bas Schothorst: “We have put in two really good days of testing. I’m getting to know a new team this season, TDS Racing, so we’ve had to work out quite a few things together. We managed to get through our entire test programme. It is important to show the others out there that we’re on the pace. My primary objective this season is to take my first win in the category. But, objectively speaking, we are hoping to be in with a chance of the title.”

Stefano Comini: “I haven’t been behind the wheel of a race car for about five months, so I was starting to feel a bit rusty! But I quickly got back up to pace and we did a race simulation which went very well. In my first season in Eurocup Mégane Trophy last year, I managed to finish third overall. So my goal is to do better in 2011! I have learned a lot and I now have more experience, which is essential in this category.”

Nick Catsburg: “I only decided to go in for this day of testing on Thursday! Boutsen Energy Racing made me an attractive offer. My primary objective this season is to do the 24 Hour races, but if we can manage to put together a competitive programme in Eurocup Mégane Trophy, I’d be interested in defending my title. I would really like to do another day of tests with Nismo, and that means winning the Eurocup Mégane Trophy again. It would be a nice challenge, and it’s something no-one has ever done before in this category, but nothing has been decided yet.”