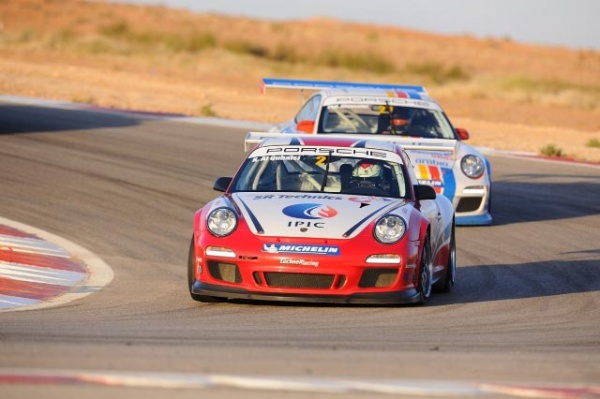 Dubai. The battle for the drivers title in the Porsche GT3 Cup Challenge Middle East will be  decided over back-to-back race weekends in the UAE next month.

Guaranteeing a dramatic climax to the 2010-11 season, the remaining six rounds will be fought out in the space of four race days at Yas Marina Circuit, Abu Dhabi on April 8-9 and Dubai Autodrome on April 15-16.

The Dubai Autodrome race weekend has been added following the loss of dates in Bahrain. Both remaining race weekends will now feature three races instead of the normal two, adding  to the excitement in the battle for the Porsche GT3 Cup title.

But  Abu Dhabi’s Khaled Al Qubaisi is determined to improve on his third place in the standings and he will now look to boost his challenge by recording his first win in the series on home territory.

Al Qubaisi showed his liking for the Yas Marina Circuit when he recorded his first two podium finishes in the series there last November, taking third place in each of the two opening rounds as the current season got under way.

He went one better by securing second place finishes in Round 4 in Bahrain and in Round 5 at Saudi Arabia’s Reem International Circuit, and would love to achieve his breakthrough race victory in Abu Dhabi.

A year ago this month, Fahad Algosaibi became the youngest ever winner in the history of Porsche one-make racing when, as a 16-year-old, he beat Prince Abdulaziz into second place at Reem.

While he has been unable to find another victory since then, Algosaibi, currently lying fourth in the championship, wants to grab at least one more race win before leaving the series to begin studies overseas later this year.

Another Saudi driver, Bandar Alesayi, will be aiming to improve on his current fifth place in the drivers’ standings after finishing third in the series last season.