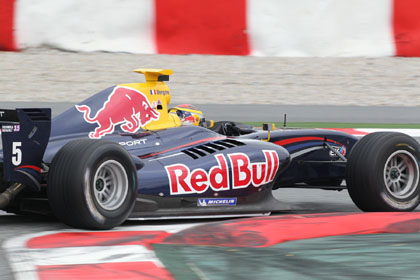 Vergne before the rain

Like the day before, the testing in Formula Renault 3.5 Series at Barcelona was disrupted by rain. The track dried out in the middle of the day, and the drivers who were fastest during that spell ended up at the top of the timesheets. Jean-Eric Vergne (Carlin) showed the quickest turn of pace, ahead of Daniel Zampieri (BVM Target) and Daniel Ricciardo (ISR).

After a first day disrupted by rain, drivers and teams present at the Catalunya Circuit waited for the track to dry out before continuing their preparation program. The first two hours of driving was under wet track conditions and several drivers were caught out, including Cesar Ramos (Fortec Motorsport), the victim of a detached left rear wheel, and Arthur Pic (Tech 1 Racing), who suffered a twisted right front suspension stay.

With the track drying out, the drivers were able to don slick tires and set about bringing down the lap times. Fairuz Fauzy, reserve driver with Lotus Renault GP and back in FR 3.5 Series with Mofaz Racing, lapped in 1’52”996, kicking off the race for the best time. Robert Wickens (Carlin) went below 1’50”, before Daniel Ricciardo stepped up to take the lead. With times of 1’46”687 then 1’42”853, Toro Rosso F1 team’s third driver took full advantage of the improved grip conditions. As we approached the end of the session, he banged in a 1’38”825, setting the fastest time of the morning.

In the early part of the afternoon, the track continued to dry out. Nathanaël Berthon (ISR) took the opportunity to bring the reference time down a notch or two (to 1’36”643 then 1’36”406). Daniel Zampieri took a turn (1’35”991) before handing over to Oliver Webb (Pons Racing), in 1’35”721. In the end it was Jean-Eric Vergne who went fastest in 1’34”409, before the rain returned to dissuade the drivers from coming back out on track.

The drivers from Formula Renault 3.5 Series will be back on track next week at the Circuit Paul Ricard Le Castellet, for two more days of testing.

Jean-Eric Vergne : “I have very good feelings at the wheel of this car. Yesterday, we were unable to get everything together to do a fast time but today we had new tyres at the right time and it worked. We are already competitive and that makes me want to fight for the title even more.”

Daniel Ricciardo : “I am satisfied with today because we showed that we were quick on the dry and in the rain. However, it is very difficult to draw conclusions about standings because of all the changes in track conditions. With my engineer, we’re getting along really well and now we want to set the car up to win.”

Brendon Hartley : “We were on the pace, right from early on. I feel very good about this car. Within the team, everyone’s working with a lot of enthusiasm. We want victory, even if many of the other drivers are also here to win. I think the line-up has never been as impressive and I am very pleased to be part of it.”