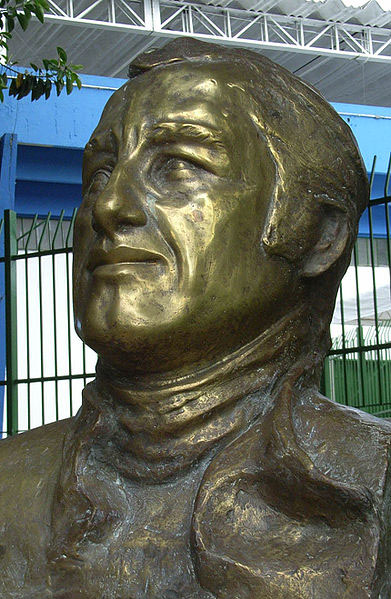 Interlagos, São Paulo. The annual pilgrimage of the F1 circus to the Brazilian city, the largest in southern hemisphere, is held at the Autódromo José Carlos Pace. It was at this track in 1975 that “Moco” – as he was affectionately known – led a one-two for local drivers in what turned out to be his only Grand Prix victory. His friend “Emmo” Fittipaldi was second.

Pace was born in São Paulo on October 6, 1944. His father was a textile industrialist and the young Pace started out in karting. He raced a Renault Dauphine early in his motor racing career. Then, armed with an Alfa-Romeo T33, he won the Brazilian Championship three years in a row, ’67 thru ’69.

Pace arrived on the European shores on the first wave of great Brazilian racing talent. In 1970, he won the Forward Trust Formula 3 Championship and also competed in the higher profile Lombank F3 Championship and placed third. In both series his Lotus 59 was entered by Jim Russell Racing Driver School.

The 1971 season saw him drive for Frank Williams in Formula 2. The highlight of the season was victory at Imola in a March 712.

The then ever-struggling Williams operation took him to Formula 1 in 1972. While his friend from their school days, Emerson Fittipaldi, became the youngest world champion, Pace could only score three points during the season, single point from his sixth place finish in Spain and two from his fifth position in Belgium.

Pace moved to Surtees F1 team for 1973. He retired from five of the first six races of the season. His two points scoring finishes came in successive events; he was fourth in Germany and made his first podium appearance in third place at the ultra-fast Österreichring, and recorded the fastest lap of the race.

His sports-car foray with Ferrari was more successful. Sharing a works Ferrari 312PB with Italian cowboy Arturo Merzario they finished second at Le Mans and Nürburgring, and third at Watkins Glen.

The 1974 season for Pace started with Surtees and ended with Brabham, as teammate to another Latin driver and another Carlos, Reutemann. The Brabham boys occupied the top two steps of the podium at US Grand Prix, the Argentine Carlos leading his Brazilian namesake. Pace set the fastest lap of the race.

His day of days came on home soil in January, 1975. The local boy won his first Formula 1 Grand Prix in front of his home crowd and happily shared the podium with old friend Fittipaldi.

The season proved to be his best in Formula 1. He followed up on his success with his maiden pole position in the following race, the South African Grand Prix at Kyalami. His podium finishes at Monaco and Silverstone helped him to sixth place in the Drivers’ Championship.

In 1976, the Brabham team switched from Cosworth to Alfa Romeo power. The 12-cylinder Milanese engines were not only heavy but also less reliable and thirsty for fuel. Pace was placed 14th in the championship with seven points while the other Carlos bid ‘adios’ to the team before the season was even over.

The 1977 season started on a high note. Pace was second in the season opener at Buenos Aires behind surprise winner Jody Scheckter in his all new Wolf. Pace failed to score in his home race and also in the next round in South Africa, where he was classified 13th.

Thirteen days later, on March 18, after deciding to skip the Race of Champions at Brands Hatch, Pace was killed in the crash of a private plane in the hills near São Paulo. Also killed were Marivaldo Fernandes, a wealthy Brazilian businessman who also once raced in British F3 and their friend Carlos Roberto de Oliveira.