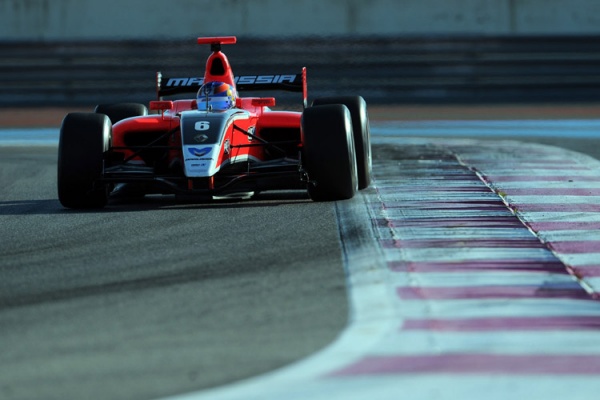 The kickoff to the season is fast approaching and Robert Wickens (Carlin) proved today at the Paul Ricard that he is one of the favourites for the title. Credited with the fastest time over two days of collective testing in southern France, in front of Brendon Hartley (Gravity Charouz) and Albert Costa (Epsilon Euskadi), the Canadian is looking sharp ahead of the season’s first race weekend. The Formula Renault 3.5 Series discipline is looking more fiercely competitive than ever this season, and all minds are now turned toward Motorland Aragon, to find our where drivers and teams are really at!

For this last day of collective testing before the first meeting of the season at Motorland Aragón on April 16 and 17, the sun was there to greet the Formula Renault 3.5 Series competitors. Sten Pentus joined up with Mofaz Racing today and Emmanuel Piget was behind the wheel of an Epsilon Euskadi again, to test out the Formula Renault 3.5 in dry track conditions after driving on the wet in Barcelona.

The morning began with a few tryout laps. The track temperature increased rapidly and the drivers opted to fit new tires early on. Alexander Rossi (Fortec Motorsport) was the first to improve on the fastest time of the previous day set by Robert Wickens. With a lap time of 1’50”625, the American topped the timesheets ahead off Albert Costa and Robert Wickens. Rossi immediately set off again with a second set of tires and promptly set a new fastest lap of 1’50”547. Jean-Éric Vergne (Carlin) meanwhile jumped into third.

After an hour and a half, Albert Costa, also with new tires, launched himself into first place with a time of 1’50”429. Nobody was able to better the Spaniard’s time, so he ended the morning first, ahead of Robert Wickens, Alexander Rossi, Jean-Eric Vergne and Daniel McKenzie (Comtec Racing).

With an ambient temperature of around 24°C, several teams started the afternoon with a race simulation, including Tech 1 Racing’s Arthur Pic and Kevin Korjus, and Albert Costa. By mid-session, Arthur Pic had some twenty laps under his belt and was on top of the timesheet ahead of Robert Wickens and Daniel Zampieri (BVM Target).

The end of the session saw team after team pitting for new tires! Jean-Éric Vergne, Daniil Move (P1 Motorsport) and Robert Wickens got close to Albert Costa’s time from the morning, but it was Brendon Hartley who first improved on the reference time, in 1’50”131. Everyone tried to beat the New Zealander on their final run of this season’s collective testing. But it was Robert Wickens who was to have the last and biggest laugh of the two days. The Canadian was the only driver to go under the 1’50 mark. With his time of 1’49”901, the driver flying the Formula 1 Virgin Racing team colours strkes a major blow before looking to the first leg of the season, finishing ahead of Brendon Hartley and Albert Costa … he’s going to be a popular one with the bookmakers!

Robert Wickens: “We had a heavy programme to get through again today. We tried a fast lap late in the day, without pressure, just for the fun of it! It all worked well again. I know I’m in the right team to win, I’m fit and it’s perfect to have been at the top of the timesheets throughout the test sessions. I’m looking forward to being at Motorland, like all the other drivers are too.”

Albert Costa: “We did a race simulation, which was very positive. At the end of the session I tried to go for Robert’s time, but we made a small change to the set-up that wasn’t as effective as we’d hoped. I feel good, I’m full of confidence and have the car to win! This will be an interesting season.”

Brendon Hartley: “The team is making its debut in Formula Renault 3.5 Series. We’ve got through a lot of work since the first collective tests in Motorland Aragón. Sometimes we don’t head off in the right direction, but in the end we always find a solution that works, like we did today. It’s a good sign. I’m here to win! I know it will be difficult and fiercely contested, but I only have one goal in mind.”