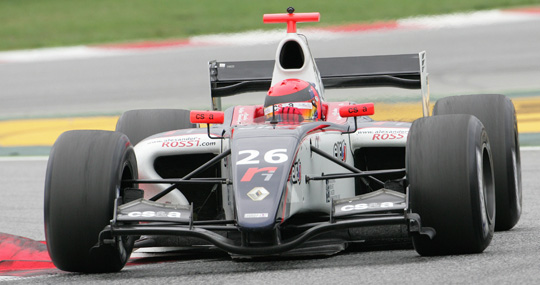 World Series by Renault test in France, leaves Alexander Rossi and FORTEC confident ahead of series opener next month in Spain

Sunny and warm conditions, ideal for testing, greeted Alexander and the Fortec Motorsport team on their arrival at the two day test which began on Tuesday morning.

Day one, Rossi and Fortec focused on the base line set up of the track. Paul Ricard, a very diverse testing circuit, and while Alexander is a veteran to it, he’d not experienced this particular configuration in his past runs here. Rossi got to grips quickly with lay out and began working with team to fine tune car set up. With near perfect weather conditions throughout the day’s session, Rossi logged 61 laps, finishing day in P5, 0.28 seconds off the quickest time and a very competitive field of drivers and teams.

On day two, temperatures crept up further with the track temperature reaching a high of 23 degrees celcius, enabling Alexander to put in a solid 75 laps around the circuit.  This extensive running allowed Alexander and Fortec to complete their pre-season development programme ahead of the first race which will take place in Motorland Aragon on the 16th and 17th April. By the end of the day’s session, there was little in it between the top running drivers and Alexander finished the day in P5, just 0.011 seconds off the quickest time.

Jamie Dye, Team Manager, Fortec Motorsport: “The two days we have had in Paul Ricard have been an excellent test program for us.  After proving that our standard car set up was good enough for P1 by a clear margin, we decided to concentrate on our development work together in readiness for the rest of the season.  We managed good lap times on old tyres and carried on doing so throughout the sessions.  What we have learnt during day two of the test has been a massive step forwards for us and we are therefore very happy with how things have gone at the test at Paul Ricard.”

Alexander Rossi: “The team have been fantastic over the course of the three collective tests and we have made a huge amount of progress since the first test in Motorland Aragon .  There is a brilliant working relationship amongst everyone at Fortec Motorsport and we have a positive feeling within the team having finished our planned testing programme ahead of the first race.  We have made truly impressive steps forward over the course of the test at Paul Ricard and I go into the first race of the season feeling really comfortable with the car and looking forward to racing again!”

Looking for a used car? Try and select your next car from the 1000s being sold.