Like many young Italian boys, little Andrea had a passion for speed and dreams of glory at Parco Monza. Hailing from the city by seven hills, the 14-year old started his career in what many consider the purest form of motorsport. Karting.

He raced against Giancarlo Fisichella, who went on to win Grand Prix races for Jordan and Renault, and Andrea Bertolini, who would later achieve championship success in FIA-GT series.

On Saturday, October 14, 1989 tragedy struck in practice at Parma when Andrea was involved in an accident with another kart, resulting in fatal injuries. His family, friends and competitors were all instrumental in starting the Andrea Margutti Trophy.

The annual “Trofeo Andrea Margutti” has become a major karting event and past winners have included his friend Fisichella, Sophie Kumpen and a young Robert Kubica was victorious in the junior category in the 1999 edition.

F1 Weekly is honored to present below an interview with Andrea’s mother, Ms Patrizia Margutti, with kind permission from Ms. Donatella Pellegrini of Parma Karting. 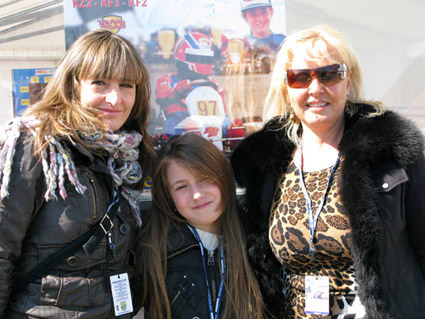 Castelletto di Branduzzo (Pavia – Italy), 22nd March 2009. Many years have passed since Andrea Margutti’s tragical death in a terrible accident which occurred on 14th October 1989 on the circuit of Parma, during a free practice session of the “Trofeo delle Industrie”. Andrea had just taken part in the Karting World Championship of Saragoza in Spain, together with Giancarlo Fisichella, Jarno Trulli and many other drivers of his same age.  He was not 15 yet. During the free practice session of Parma his kart overturned, as it sometimes happens in karting. Very often this kind of accidents have no consequences, but not that time.

“Andrea, a nice guy who made friends easily, raced in the 100 category and was regarded as a promise of Italian karting,” remembers Umberto Pellegrini, the manager of the racing centre of Parma and who still organises, together with his family, the Trophy in memory of Andrea.

2009 is the year of the 20th edition of this event, which takes place in Castelletto di Branduzzo for the first time – in the province of Pavia, in northern Italy. The Andrea Margutti Trophy had its first venue in Rome – Andrea’s hometown – on the Pista d’Oro; then it moved to Parma, upon Umberto Pellegrini’s invitation. In fact, after the first two editions, the event had reached such an importance at international level that it was necessary to find a more suitable venue. After the two editions in Rome and the 17 in Parma, we have now arrived at the 20th edition in a row and, given the forthcoming closedown of Parma kart track, the 7 Laghi circuit of Castelleto di Branduzzo is the venue chosen for this edition.

This is what Patrizia Margutti, Andrea’s mother, remembers: “As a mother I find it amazing that 20 years have already passed. After the 17 edition of the Trophy which took place in Parma, I still need to get used to this new circuit of Pavia, but I must say it is a beautiful track and well organised. I’m glad for the many participants this edition of the Trophy has; a great satisfaction in memory of Andrea. For me this event means a lot, not only to keep alive the memory of Andrea as a mother, but also because the Trophy means a lot on a sports level too, thanks to the new generations that keep on being present here. It is something really important. I think that if Andrea hadn’t left something deep behind, all this success wouldn’t have come.”

What does karting represent for you?

“It is my whole life. I’ve been living in karting for thirty years. First with my husband, who used to drive a kart, then with Andrea, who started driving when he was only 2 years and a half, on a kart expressly made for him. Andrea kept on running achieving greater and greater results, until the world championship of Saragossa, where he did greatly till the final when he was stopped by a technical trouble. Then the tragedy, with two months to go to his fifteen years. It was a fatality: his kart overturned and fell right on his chest and crushed his myocardium. It was an accident similar to many other accidents, but the consequences were fatal to my son.”

“Yes, as usual. It happened right in front of my eyes. In those days I was very motivated and I supported him very much. I took his times, I was always busy, for everything.”

Is your daughter Emanuela keen on races too?

“No, she isn’t. Emanuela – she is 30 now – was not allowed to practice karting, even though she would have liked it. My niece Rachele won’t be allowed too. We are here for this appointment, but that’s all.”

How did the idea of the trophy in memory of Andrea come to the light?

“It was thanks to his friends. First the Piccolo family, then the Grieco family, Giancarlo Fisichella together with all his friends Danilo Rossi, Belletti, Palmieri, Orsini, Venieri and many others. They used to race altogether in Andrea’s same category. The first edition of the trophy – in 1990 – was in Rome and there were many foreign drivers too. There were immediately lots of entrants and that’s why we were almost immediately obliged to choose another circuit, a bigger and more suitable circuit. The circuit that Andrea liked most were those in Parma and in Jesolo. One day I took the decision by myself and I went to Parma. I went on the track. I needed to feel what sensation could I get.  It was really hard, but I was helped by Umberto Pellegrini, Donatella’s father – Donatella now organises the Trophy together with her brothers Tiziano and Germano -, who told me: give me a chance to redeem myself. It was then that I felt that we could run the Trophy in Parma. The only thing I said was that for me it was absolutely necessary that towards the Trophy there must always be a lot of affection. For me that was what really counted. I don’t care what turns around the Trophy: I neither want to know nor see it. What I want is simply the respect towards my son, and that’s what I get from the Pellegrini family. That’s why the Trophy has remained in Parma and why I wanted the Pellegrinis to manage it. It is just we have become a big family, and I would be really disappointed if I lost them, even though the race should move to other places. I’d always like them to manage the Trophy.”

How do you consider the growth of the event?

“In the first years, every time I felt so moved in remembering the loss of Andrea, also because all his friends took part in the competition. But I received lot of affection from the protagonists of these last few years, even though I don’t know them very well. I’ve seen this event growing so fast, and when I see the satisfaction in the eyes of these drivers’ parents – who always thank me – it is a beautiful sensation. After all, I should be the one to say thanks.”

What’s your desire for the future?

“I wish the Margutti Trophy never ended. I think about it over and over again. I’d like the television to be more active, to show to a wider audience all that lies behind this event, feelings above all. The organisers are really committed.”

What are your contacts with this world?

“Sometimes I and Fisichella call each other. But all Andrea’s friends are still so emotionally involved in the event and they talk about it using the present tense, not the past. In one of the next editions I’d like to embrace once more all Andrea’s old friends. I’d like to see them again; it would be marvelous.”