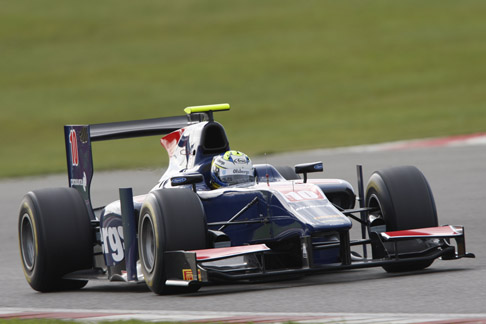 After a cold and wet first day yesterday, the thirteen GP2 Series teams were greeted by a bit of sunshine this morning at Silverstone for the second and final day of the opening 2011 pre-season test. A dry track meant that Pirelli’s wet weather tyres were replaced by slicks, enabling the drivers to push their GP2/11 machines to the limit.

On good form since the beginning of his 2011 campaign, Giedo van der Garde at Barwa Addax was the early pacesetter of the morning session in 1:41.434, but by the first hour mark his laptime was bettered by iSport’s Sam Bird. The Brit stayed at the top for half an hour before being edged out by another Brit, Jolyon Palmer at Arden International. The rookie lapped the circuit half a second quicker than his countryman, but soon after that Jules Bianchi improved his personal best enough to claim the top spot.

At mid-session, with most of the drivers on new tyres, the standings kept on changing as everyone on track tried to get the most out of their fresh rubber. Eventually, on the one-hour mark, Christian Vietoris at Racing Engineering moved to the top of the timesheet ahead of Bianchi, Dani Clos and Charles Pic. The German’s pace was never matched, and he even improved his personal best in the last half an hour of the session to increase the gap with Bianchi. The session was briefly interrupted by five red flags, the last one happening with two minutes left on the clock and ending the proceedings for the morning.

The afternoon session opened in even warmer conditions and it was Vietoris who set the early pace ahead of Romain Grosjean and Luca Filippi.. On the one hour mark, Lotus ART’s men took control of the rest of the field, with Bianchi ahead of Esteban Gutierrez. Despite improving on his following lap, the GP3 Series Champion failed to edge out his teammate by 0.004s. Bianchi stayed firmly at the top, while Scuderia Coloni’s Michael Herck made his way past Vietoris to claim P3, but the German replied with another quick lap to gain his position back. Soon after, he managed to clock in a fastest laptime that put him back at the top of the timesheet.

However, the Racing Engineering man’s pace was bettered by iSport’s Marcus Ericsson who snatched the top spot with forty-five minutes left on the clock. He lost it temporarily to Herck, but on the final shoot out managed to lap the British track in 1:40.154, and became the fastest man of day. Bianchi, Pic, Vietoris, Grosjean, Gutierrez, Oliver Turvey, Luiz Razia, Max Chilton and Johnny Cecotto rounded out the top ten.

Next up, the GP2 Series paddock will head to Barcelona for the second and final 2011 pre-season testing on April 19-20.