Star from Down Under Mark Webber is hoping to get his F1 season back on track. The season opener on home ground yielded the same best finish on home soil as his debut with Minardi. His young teammate, Sebastian Vettel, was on a different planet in Albert Park.

Webber set the pace on Friday. Vettel and McLaren boys will give him run for the pole and company in the race.

Sunday the simmering heat and humidity of Malaysia will take its toll. Rain may add more spice to the show. Michael Schumacher, the most successful driver in F1 and Sepang’s short history, has predicted it might be a “lottery.”

Red Bull and his young fellow German may still hold the winning number when the checkered flag falls on the Petronas Malaysian Grand Prix.

McLaren is being tipped as the most likely team to challenge Red Bull, at least in the first half of the season. With two world champions as teammates it will be interesting to see if Lewis can do to his teammate Button what he has always done to his teammates. To the surprise of many it was Button who grabbed two early season victories last year before Lewis landed his first win.

Ferrari, the prancing horse. The famous Italian stable may not be so stable for Felipe Massa, who has become Mark Webber of Maranello. Very good but with a teammate who is very good +, and then some.

Fernando Alonso, jockey du jour at prancing horse, missed out on his third championship last year in the final round due to a team blunder. He collected valuable points in Australia from his fourth place finish.

Renault’s Russian driver Vitaly Petrov is now back on earth after his historic orbit of the F1 podium in Albert Park. Nick Heidfeld was chosen to replace Robert Kubica, and was unable to demonstrate, due to damage suffered at the start in Australia, what he could do in a car good enough for Petrov to be on the podium.

Toro Rosso. The two young drivers in what was formerly known as Minardi, Jaime Alguersuari and Sebastien Buemi, are both looking to avoid the Speed/Liuzzi treatment by parent company’s motorsports matador, Dr Helmut Marko. 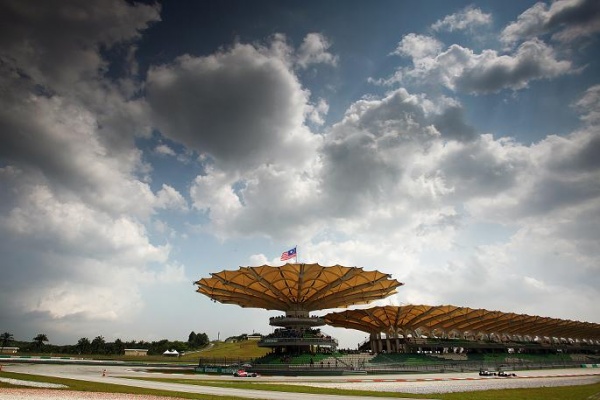 The Sepang track was designed by Hermann-the German-Tilke and hosted the inaugural Malaysian Grand Prix in 1999, victory was gifted to Eddie Irvine by his Ferrari teammate, Michael-the even more German-Schumacher.