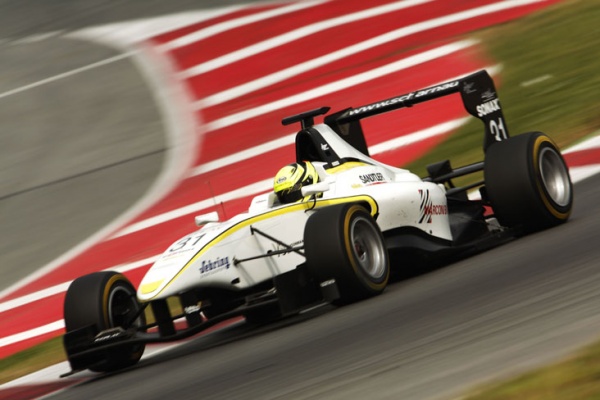 RSC Mücke Motorsport’s Nigel Melker was the fastest man out on track at Circuit de Catalunya today, after setting the best time of 1:37.882 on the final day of 2011 official GP3 Series testing.

Once again the teams had to contend with low temperatures at the Spanish circuit. When the lights turned green and the pitlane opened, the drivers all fed out onto the track for their initial installation laps in the cool conditions. Jenzer Motorsport’s Nico Müller briefly held on to the top spot before Lotus ART’s Valtteri Bottas continued his good form and knocked the Swiss into second, with James Calado soon following suit.

Just before the thirty minute marker, the teams began switching to fresh rubber and the times started to drop consistently. Alexander Sims was first to get to grips and post a quick time which was swiftly beaten by his Status Grand Prix teammate Antonio Felix Da Costa. RSC Mücke Motorsport’s Michael Christensen slipped into third ahead of Tech 1 Racing’s rookie Andrea Caldarelli, Bottas and Calado. During the next hour, Marussia Manor Racing’s Adrian Quaife-Hobbs, Da Costa and Sims all took turns at the top until RSC Mücke Motorsport’s Nigel Melker clocked a laptime quick enough to put him ahead of the field. The Dutch driver’s time went unbeaten for the remainder of the session. Sims finished second fastest ahead of Müller, MW Arden’s Mitch Evans and Quaife-Hobbs.

Despite a threat of rain over the lunch break, the afternoon stayed dry and bright for the final pre-season test session of 2011. For the first half of the session, it was Valtteri Bottas heading up the field with a 1:39.773 lap until midway through the afternoon when Melker edged ahead of the field once more. As usual, the Spanish track was slower in the afternoon than the morning, giving drivers another opportunity to concentrate on race simulations and setups. The teams were also able to evaluate the tyre degradation and see how it will play a role in the upcoming season.

The final hour of the day saw Quaife-Hobbs take over at the top of the time sheet with a 1:38.625 lap, and with the rest of the field unable to match his pace, the British driver’s time went unbeaten. A red flag two minutes from the end of the session ended proceedings prematurely, and the chequered flag was shown for the final time in GP3 2011 pre-season testing. Müller finished in second spot ahead of Marussia Manor Racing’s Rio Haryanto, Bottas and Christensen.

The GP3 teams will be back on track in three weeks time for Round 1 of the 2011 season in Istanbul, Turkey. 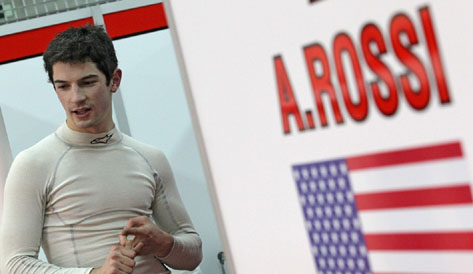 In March, Rossi and Fortec Motorsport had six productive pre-season collective test days in Barcelona, Paul Ricard and Motorland Aragon. Rossi, a veteran to the circuits but new to championship winning team Fortec Motorsport, used this valuable time to fine tune the set up for his driving style and build internal relations with team. These tests were diverse with mixed weather conditions, enabling Rossi and his team of engineers to prepare, collecting valuable data for a variety of situations for the upcoming season.

World Series by Renault is a successful platform for aspiring formula car drivers making the final step to F1. World Series has been the springboard for Sebastian Vettel, Robert Kubica and Jaime Alguersuari to name a few of late. Although Rossi is an official rookie this year to World Series by Renault he completed a strong debut in Monaco for his first World Series race in 2010. In addition, Rossi finished fourth overall in 2010 GP3 Championship and for 2011 was recently announced in Malaysia as part of the Air Asia Team Lotus Driver Development Program. Rossi also has duties as an ambassador for the FIA Institute Young Driver Excellence Academy .

“We have had a very strong set of pre-season tests and we’ll be looking to carry this success into the first race this weekend”, Rossi commented. “The team and I were really happy after the Paul Ricard test with the progress we made, developing the car around my driving style.  I was second quickest in the Alcaniz test and while you can’t focus too much on test times, with many variables attributing to an overall time, it’s a good feeling knowing we should be very strong this weekend for opener. The car is really good and I’m comfortable with the team and my surroundings.”

“In addition to pre-season testing, physical training has been top priority to me this winter,” Rossi added. “Between my FIA commitments and Air Asia Team Lotus Driver Development Program duties, my physical conditioning has top priority and has filled my remaining time. I’m well prepared and in the best possible physical shape I can be. I’m confident that my team and I will be challenging for wins from the onset.”

Jamie Dye, Team Manager, Fortec Motorsport commented “We’ve had a successful six day test programme over the course of the past month.  We are happy that we are where we want to be; having made a lot of progress with the car.  The team has full confidence in Alexander that he will be able to deliver for us this weekend and we are now all focused on the first qualifying session of the season,”