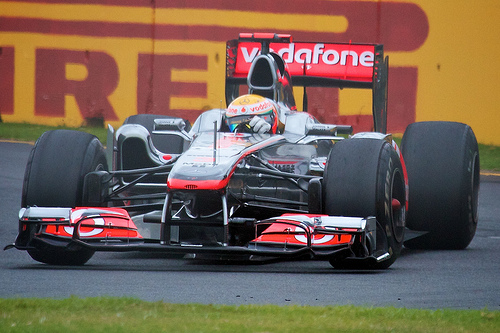 Hamilton puts in a fantastic drive to take victory in China.

Mark Webber never giving up goes from P18 to the podium.

Sebastian Vettel with a poor start happy with second place.

“Fernando Alonso: It’s very easy to choose the strategy when you have the fastest car and it’s very hard when you are slow. Webber today showed qualifying is not very important.

We need to improve the car above everything. I don’t think it would have changed much. We were much slower than the cars we had in front so we would ended up with a similar result.

we didn’t have any particular problems. We just weren’t fast at any point during the race and we kept on losing positions little by little.”

“Then we opted to go for two stops so it looked like we were in a good position during some points of the race and others where they were flying like bullets from behind. We had to try to hold on and finish the race in whatever position.”

Vettel: “We made a couple of mistakes and we had some problems, but still we finished second so I am very happy for that. Congratulations to Lewis and McLaren – it shows that one race when you try something a bit different, you do mistakes. It is natural and there is someone else to beat you.

We learned a lot today. I am the only one on two stops here [on the podium] so surely something to look into tonight.”

I think the start was not the best we had this year, on top of that it seems for some reason the left hand side is worse than here,” he said. “It wasn’t a 100 per cent good start so I lost position.”

“It was quite a surprise – Jenson in front of me went into my garage,” Vettel recalled. “We had something similar with STR, I don’t know what attracts people to stop in our garage… The guys kept their heads cool, we came out in the lead.”

Vitaly Petrov: To be P9 and take two points for the team is still good, given that we did not qualify in high positions. However, we are still a bit disappointed that we did not challenge higher up the order and gain even more points.

The strategy was OK, but we must now see where we can improve. We will analyse the data and see what went wrong, and we will try to repeat the results we had in Australia and Malaysia when we reach Turkey.”

Nick Heidfeld: I’m not happy with where I finished, even though I started P16. The start was very poor, but I went aggressive into the first corner and made up a few places. After a few laps I started having problems with the KERS and couldn’t use the full power all the time, which made overtaking and defending quite difficult. I think our pace in the second stint on the soft tyre was not too bad, but it was still hard to attack the cars ahead of me.

That’s why we made an early stop for hard tyres in the hope that we could get some clean air and jump the cars ahead of me. Unfortunately Perez and Sutil stopped on the same lap, and it meant I couldn’t really show our pace in the final stint.”