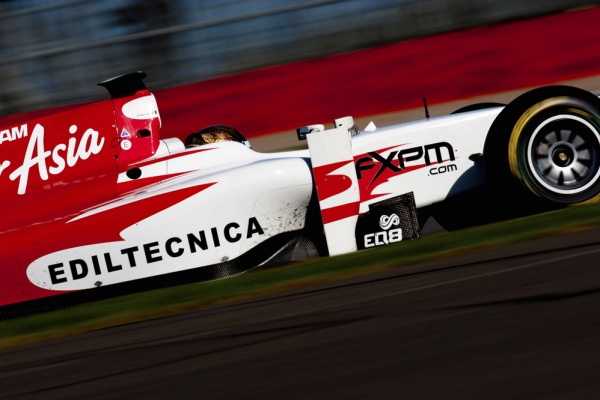 The GP2 Series paddock gathered this week at Circuit de Catalunya for the final 2011 pre-season testing. The thirteen teams have two days to prepare before the opening round in Istanbul in three weeks time.

Sunshine and a dry track welcomed the twenty-six cars this morning. The first half hour of the session was pretty quiet as drivers took to the track in order to complete installation laps. Julian Leal was the first one to set a laptime for Rapax, but it was Jolyon Palmer at Arden International who set the early pace. Carlin’s Max Chilton soon improved his countryman’s personal best and moved to the top of the timesheet. At the halfway mark, Davide Valsecchi at Team AirAsia broke the 1:30 barrier and went quickest, one tenth ahead of Romain Grosjean at Dams while GP3 Series Champion Esteban Gutierrez moved into P4. The Lotus ART driver improved further on his following lap and ended a shy 0.06s behind Valsecchi. The Italian’s domination of the timesheet was short-lived however as Barwa Addax’s Charles Pic put his head down and edged Valsecchi out of the top spot by 0.04s. The Frenchman’s laptime remained unbeaten until the chequered flag with Valsecchi and Gutierrez rounding out the top three.

As the afternoon session started, it was Valsecchi who set the early pace. But just before the one hour mark, Lotus ART’s Jules Bianchi went top, improving the Italian’s laptime by 1.9s. From then on, the rest of the field’s mission was to close the gap with the Frenchman. It started with Sam Bird at iSport, but soon after that, rookie Kevin Mirocha at Ocean Racing improved and moved up to P2. In the following minutes, it was Chilton who got the nearest to Bianchi’s laptime – 0.6s closer. It was then Grosjean and Gutierrez’s turn to move up to P2 and P3 respectively, four tenths from Bianchi’s personal best. In the final hour, Luca Filippi at Super Nova found some extra pace to knock the Lotus ART driver off the top spot while Scuderia Coloni’s Michael Herck went P3. The Romanian lost a position to Valsecchi when the Team AirAsia man improved his laptime with thirty minutes left on the clock. On his following lap, the Italian went even quicker, which was enough to take control of the timesheet. As the drivers started a string of fast laps, a red flag briefly interrupted the proceedings. After the pitlane reopened, the top ten remained unchanged. A second red flag with five minutes left on the clock halted everyone’s last efforts. The session was green flagged one last time, but Valsecchi’s fastest laptime stayed unbeaten.