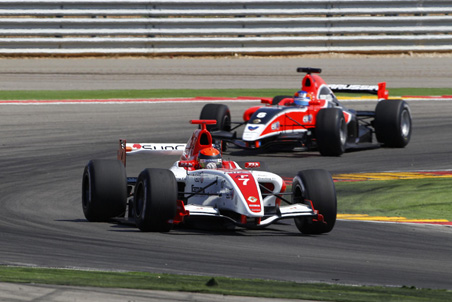 Rossi took a commanding win in the opening round of the series and came home in second position in race two at Motorland Aragon earlier this month. With a current total of 43 points and a 15 points lead over his nearest rival, he now heads to Spa-Francorchamps in Belgium. Rossi, a past winner at Spa in 2009 Formula Masters and 2nd in 2010 GP3 Championship, is no stranger to what is considered by drivers and fans alike to be one of the most challenging race tracks in the world.

Alexander Rossi comments, “Coming off the opening rounds in Aragon a few weeks ago, I can confidently say that the team and I met our goals to open the season. However, we are still looking to improve a few key aspects of our overall performance to ensure that we can maintain this current momentum. I am very much looking forward to the event in Spa this week as it’s personally one of my favourite circuits and I have a good track record there in previous championships. The weather always plays a factor at Spa, but we feel that our wet set-up is on par with other teams, so we are relatively confident in that respect. Our focus this weekend remains the same as always, to win, but with the added pressure of coming in as Championship leaders, we cannot get complacent. We need to keep pushing, there’s a lot of work to do.”

Jamie Dye, Team Manager, Fortec Motorsport, concludes, “Alexander’s pace over the winter, and in race rounds 1 and 2 earlier this month, shows that he is one of the men to beat this season. We go to Spa this weekend leading the Drivers’ and Teams’ World Series by Renault Championships and will aim to take away maximum points once again. Spa is another circuit where we have a good set-up, so for the Fortec team our goal is to extend the lead in both points tables and keep up the fight at the business end of the grid. Good luck to our drivers and the team and we hope to see plenty of fans support in Spa.”