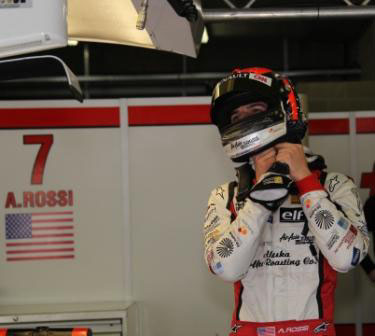 Starting from 15th position, American Alexander Rossi produced a solid performance to finish 7th in race two of the World Series by Renault round at Spa-Francorchamps, Belgium today.

After a difficult qualifying session this morning, where Rossi struggled with car set-up and admitted to not maximising his track time, Rossi lined up his Fortec Motorsport car in P15 on the grid for the afternoon’s race.

Once again Rossi made a great race start, keeping out of trouble when a first corner clash spun his team mate, Ramos, 360 degrees. Rossi moved up into P11 as the pack forged on to Eau Rouge and then he skilfully took Rosenzweig for 10th place on lap two where he ran until the pit stop window opened. His Fortec Motorsport team opted for an early stop strategy as they did in Aragon, and Rossi entered the pits as soon as the window opened on lap five. Re-joining the field in clean air, Rossi was soon able to capitalise on position gain and was running with good race pace in P7.

He then had to close the gap to Zampieri ahead, but with the leaders now running at similar speeds and due to his early pit stop, Rossi was struggling as his tyres dropped away in the closing stages, making it impossible for him to achieve a realistic challenge for P6.

Rossi took the chequered flag at the end of the 22-lap race in P7, as he did in race one, and picked up a further six Championship points to bring his tally to 55, with the Fortec Motorsport team now on 67 points. Rossi now sits in P3, only two points behind today’s race winner Jean-Eric Vergne, with his Fortec team in P2 in the World Series by Renault FR3.5 Championships.

Alexander Rossi commented; “We made a lot of changes overnight – some good, some not so good – but I did not maximise some of my laps in qualifying and probably could have found a few more tenths which cost us a few positions, but I will learn from that. My race start was good and after the pit stop we showed some genuine pace, which is really positive. As we stopped early though, my tyres were quite gone by the last few laps, so I could not improve on my times in the last stint. However, it was a good weekend for us and we will take away these experiences and move on. We cannot get too disappointed about our results this weekend, but we have to move forward significantly as the Championship is quite tight.”

Jamie Dye, Team Manager, Fortec Motorsport, added; “Our pace in the race was good and the lap times were there. Catching and passing the other cars is another thing, however, and that is what we have to work on again for our cars in the next race. If we were getting a tow in the fast parts of the track Alexander was able to pass, but we were losing out in the slow parts. We obviously have some fine tuning to do to get more out of the car, but Alexander drove a great race, and to finish 8 seconds behind the leader after starting P15 is a very good overall achievement. We have some small tweeks coming for Monza which will help, but the Carlin’s are doing a mega job, so we shall be working towards closing the gap technically as quickly as we can.”