Sebastian Vettel is unstoppable with Victory at Istanbul.

Mark Webber with a late pass on Alonso takes second.

Ferrari with great race pace puts Fernando on the podium.

Is there too much passing in Formula One?

Sebastian Vettel: “All in all I am very happy. On Friday I had an accident and crashed the car badly. All the guys, even Mark’s guys helped and fixed the car. It meant some extra hours which I am sorry for, but yesterday and today made up for it. I am pleased with the results and a big thanks to the team.

It wasn’t easy from the start to know what is going to happen,” he said. “You have an idea about the tyres and how long they will last, but you have to wait for the first and second stints to see the trend.

I could have stayed out on primes but if the safety car comes out you are on used tyres, so I had a another short stint. I was very much in control, I am very happy with how we communicated with the race and how we reacted.

I am very pleased and since China we have definitely made a step forward. We have learned our lesson and have to make sure we keep momentum into the next race.”

Fernando Alonso: “I think we did a good weekend overall,” said Alonso. “The car performed a bit better than what we did in the first three races of the championship, so finally we enjoyed racing again and we enjoyed a race fighting for the podium positions, changing position through the race. Finally we can enjoy racing again.

We lost a little bit of time behind Rosberg at the beginning, and we did not feel the possibility to fight for P1 anymore, so we concentrated on P2,” he said.

I had a little bit of advantage in terms of tyre degradation compared to Mark, we used the DRS and I was able to overtake him, and in the last part of the race it was more or less the opposite.

“It was okay, fighting with Red Bull these days is difficult. It was close but we’ll try again.” 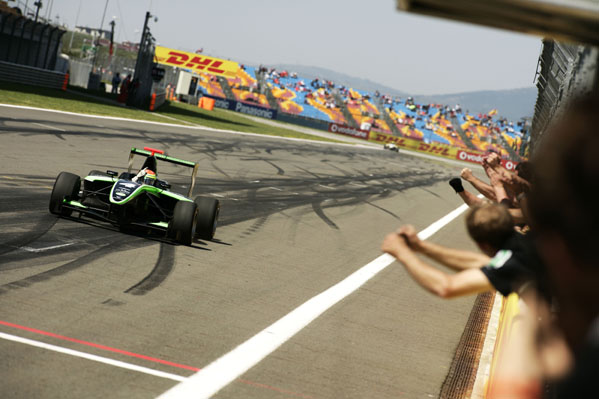 In what was an action packed race full of overtaking maneuvers, Alexander Sims made the perfect getaway and kept a cool head to build up a comfortable lead during the 16-lap race. Sims’ teammate Antonio Felix Da Costa stormed off the line from fourth and made up two spots to take second from RSC Mucke Motorsport’s Michael Christensen. MW Arden’s Mitch Evans slotted into fourth ahead of Lotus ART’s Valtteri Bottas.

With Sims putting in fastest laps at the front, the rest of the field were left to battle for the remaining two podium spots. Yesterday’s race winner Nigel Melker was the man on the move – the Duchman made up one spot at the start and was quickly fighting his way through the field. A battle with Tech 1 Racing’s Andrea Caldarelli ensued for sixth, and Melker then set his sights on a struggling Valteri Bottas in fifth. The Finn from Lotus ART lost three places in quick succession as Caldarelli and Dean Smith also found their way past.

The Mucke duo of Christensen and Melker continued to make their way through the field, and both made quick work of passing Evans for third and forth respectively. By lap 12 as the race entered the final stages, Sims was comfortably in the lead by over four seconds, but what hope the Irish team had for a one-two finish were dashed as Da Costa went wide allowing both Christensen and Melker to slip past.

With Sims now 7.4 seconds in the lead the podium all but written, Da Costa and Caldarelli battled it out in the final laps for fourth spot. The Portuguese driver kept the Italian behind him ahead of Addax Team’s Smith who had made his way through the field from ninth on the grid, Evans, Bottas, Tom Dillmann and Rio Haryanto in tenth.

The GP3 Series will be back on track in two weeks for Round 2 in Barcelona.