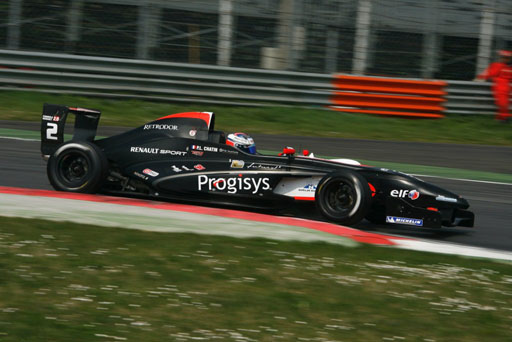 The “EUROFORMULA VOLANT” 2010, last weekend took part in the second leg of the ALPS Championship on the IMOLA track and stepped up on the third podium for the first race after a nice fight for victory. It seems Italian air suits our young driver well!

Paul Loup CHATIN still had a few regrets though because he broke the anti-roll bar with his second set of new tyres, which prevented him from improving his position. He had to be satisfied with a 3rd and 4th place on the grid for the two races.

After a nice first race, the “EUROFORMULA VOLANT” started the second race with high ambitions. Blocked behind 3rd though he had to pass him quickly in order to get on the “right carriage” and not lose the lead. Unfortunately, when he took on the driver in front, Paul Loup CHATIN found himself in the dirt and span out. Taking off again more than 10 seconds behind the last car, he got back up to a nice 6th place.

Actually 5th in the general provisional ranking of the ALPS Championship, Paul Loup CHATIN, “EUROFORMULA VOLANT” 2010, believes in his hopes for victory at the end of the season:

“Even if I lost some precious points in the second race, I still have every chance in the championship. We’re very competitive and the championship has a way to go. This second podium boosts my confidence and the times I made in the race bode well for the future. I hope to climb on the podium again for the next race which will run on the PAU track and rise some more in the general ranking of the championship.”

“Paul Loup again showed all his qualities this weekend, most notably when he moved up from last to 6th position and scored more points in the championship. He has the essential mind set to hope for a career in motorsport. Victory isn’t far away and I think he’ll be able to make it a reality in the next races.”

Next meeting for Paul Loup CHATIN on 23 and 24 May on the legendary track of PAU where his heart will be set on reaching the top step of the podium.