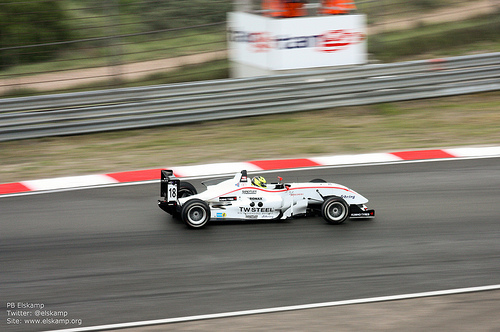 He was already happy with second place in qualifying on Friday, but today, Dutchman Nigel Melker (Mücke Motorsport) did even better and won the seventh season round of the Formula 3 Euro Series. At the 4.307 kilometres long Circuit Park Zandvoort, located in the dunes at the Dutch North Sea coast, Felix Rosenqvist (Mücke Motorsport) completed the second 1-2 of this season for Mücke Motorsport. Points’ leader Roberto Merhi (Prema Powerteam) finished third in the 26 laps’ race.

At the start, Felix Rosenqvist took the lead, but he was only able to keep it until the fifth lap. Then, Dutchman Nigel Melker made the race-deciding move as he overtook Rosenqvist and took over first place. The Swede kept up with his team-mate until making a mistake on lap 18. He only just defended his second place until the end of the race, taking the flag ahead of Merhi and Laurens Vanthoor (Signature)

Germans Marco Wittmann (Signature) and Daniel Abt (Signature) already collided on the opening lap during an overtaking manoeuvre. Abt retired with broken suspension, Wittmann was able to continue at the back of the field. He just finished behind the Motopark trio of Kimiya Sato, Gianmarco Raimondo and Jimmy Eriksson in tenth place.

Nigel Melker (Mücke Motorsport): “Winning my home race is a great feeling. My start wasn’t fantastic and I lost one place to Felix, but then he made a mistake from which I could benefit.”

Felix Rosenqvist (Mücke Motorsport): “I was in front, but then I made a big mistake just before the chicane and thus gave Nigel the chance to overtake me. However, I could keep Roberto Merhi behind me, although I wasn’t able to pull a gap.”

Roberto Merhi (Prema Powerteam): “I knew that overtaking at Zandvoort is rather difficult and therefore, I wanted to make up some places at the start already. That went quite well. I was able to keep Laurens Vanthoor behind me throughout the race.”