Knock, knock, knocking on Heaven’s door. Jules Bianchi, Jean-Eric Vergne and even Swiss-born Romain Grosjean are working and racing hard to become the next French F1 driver, and all have the talent to become their nation’s first world champion since the Professor, Alain Prost.

One young man who may not have to ring the bell to gain entry is Brandon Maisano. The kid from Cannes, who is only 17-years old, is already part of Ferrari Driver Academy. And now a winner in the Italian Formula 3 Championship in the opening round past Sunday.

In 2006, he was placed fifth in the French Junior Championship, won the Champions Cup in Spain and the Swiss Championship.

The following year he moved up to second in the French championship and finished third in the prestigious Monaco Kart Cup for juniors. He took his second successive victory in the Champions Cup in Spain and also won the Bridgestone Cup at Lonato, Italy.

In 2008, it was a very good year. Maisano won the Monaco Kart Cup and the French Championship. He was also runner-up in South Garda Winter Cup and also in the WSK International Series. All in KF3 class. The Spanish success continued to flow, this time in the KF2 class.

In 2009, now in KF2 class, he raced on three different continents. In Europe he won the South Garda Winter Cup and the famous Andrea Margutti Trophy. He placed 15th in the Asia Pacific Championship, and here in the US he was third in the SKUSA Super Nationals. 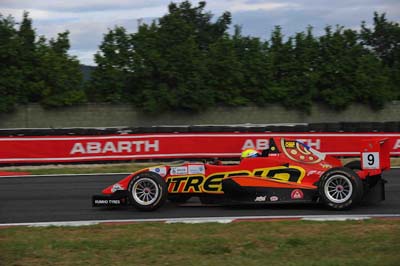 In 2010, Maisano made his single-seater racing debut in style; winning the Italian Formula Abarth series with four wins and finished half of the 14 races on the podium.

His sweet sixteen – and day of days – moment was when he was invited to the Halls of Maranello to join the Ferrari Driver Academy.

Now only 17 years of age, and the possibility of a prancing horse ride not too far in the distance, the best this young man can do is keep winning.

And that seems to be the Maisano agenda.