Webber grills a hot one in Barca!

It’s a Red Bull on pole but not Sebastien Vettel. Frenchman wins the GP2 race but not Romain Grosjean. Back home again in Indiana is pole day.

Formula 1. Round five – the Spanish Grand Prix at Circuit de Catalunya – will see the fifth start from pole position by a Red Bull pilot. Vettel’s run of four-in-a-row was brought to an end by his teammate Mark Webber, his first since Spa-Francorchamps last year.

The Australian dominated the Spanish event last year and will be looking to get his 2011 campaign back on track and snatch the momentum from his German mate on race day.

Vettel, championship leader will start on the front row. He was third last year in Barcelona and is currently on a hot roll with three wins and a second in the first four races of the season so far.

Red Bull domination was highlighted by the time recorded by third fastest qualifier. Lewis Hamilton’s McLaren was 0.980s slower than Webber’s best. Fernando Alonso in a Ferrari shares the second row with his old teammate.

Pastor Maldonado, Venezuelan rookie and GP2 Champion from last year, qualified ninth and will share row five with the man who won five titles with Ferrari, apart from his first two with Benetton, Michael Schumacher. 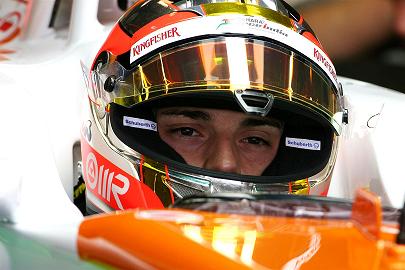 GP2. French driver Jules Bianchi took pole but was stripped of the top spot for not slowing down under a yellow in qualifying. Another Frenchman Romain Grosjean led the championship after round one in Istanbul.

It was left to a third French driver, Charles Pic, above, to win Saturday’s feature race. He also won this race last year. Dutchman Giedo van der Garde inherited pole and finished second to his Barwa teammate. Sam Bird from England was third man on the podium for Isport International, team which took Timo Glock to GP2 glory.

DAMS’ driver Romain Grosjean was fourth and his championship rival Jules Bianchi was eighth, and will start Sunday’s sprint race from pole.

Indy 500. “They will be on it!” Qualifying for the Memorial Day weekend classic, which started in 1911, takes place today. Brazilian Helio Castroneves set the fastest time for Captain Penske in practice and will be looking for a record-tying fourth win next weekend.

Greetings and racing regards. From Barcelona to the Brickyard.