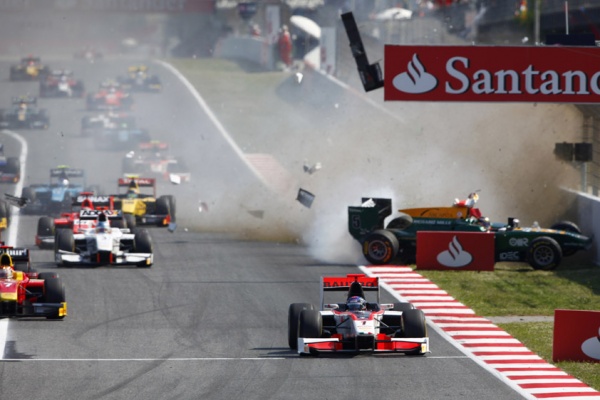 Fabio Leimer has repeated his sterling performance from last year with another strong drive from pole to claim victory in this morning’s sprint race in Barcelona, leading all the way to win by ten seconds from Dani Clos and Marcus Ericsson.

The Swiss driver made a good start when the lights went out to lead the field into turn one, with Clos powering by a slow starting Jules Bianchi. The Frenchman was swamped at the start, with a charging Giedo van der Garde Pic bottled up between them: Bianchi pushed left, the Dutchman ran out of road, and the pair were into the wall with a safety car period to clean up the mess.

At the restart the top six (Leimer, Clos, Ericsson, Sam Bird, Davide Valsecchi and Stefano Coletti) were given a bonus as Pic bottled up the field behind him as he had to pit for a black and orange flag, putting clear air between Coletti and Josef Kral. With tyre wear critical on the warming track, any gift was welcome with a long race to run.

At the front Leimer eased away from his rivals, pushing at his own pace as he went, while Coletti was attacking the Italian hard to P5. The Monegasque’s efforts took too much from his tyres, however, and towards the end of the race he fell back into the clutches of Kral: the pair ran side by side into turn one but didn’t leave each other any margin, and they were soon watching the closing laps from the sidelines.

And when the flag dropped it was Leimer who was punching the air with delight, ten seconds ahead of Clos and another ten seconds to the good over Ericsson. Valsecchi soaked up the early pressure from Coletti and then took advantage of Bird’s ageing tyres to claim fourth in the closing stages, with Fairuz Fauzy picking up the final point donated by Coletti and Kral.

At the end of the second weekend of the season van der Garde and Bird share the lead of the championship with 21 points a piece, ahead of Pic on 15, Grosjean on 13 and Coletti on 10, while in the team’s title run Addax have pulled ahead of iSport by 36 points to 29, with Dams third on 13, two ahead of Team AirAsia with Trident a further point back on 10.